I Saw Him First By Marjorie Sharmat

Posted on December 3, 2012 by mondomolly

Is Seymour worth fighting for? 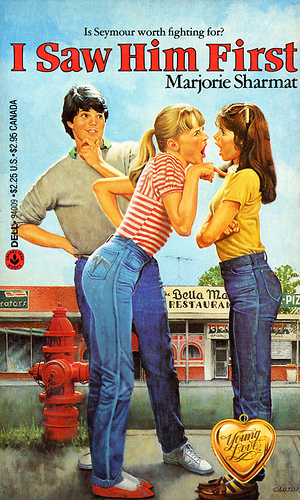 I’ll answer the question up front: no. No, he is not, because Seymour barely exists. I know I should have learned my lesson about picking books based on their covers by now, but… well, seriously! Take a look at that cover! Seymour is all like “Awww, yeah: mom-jeans catfight!”

The plot in this one is so under-developed, I really don’t have much to add to the 5-star review on Amazon:

“In the book I Saw Him First, the setting takes place in the school, outside and in houses.”

That is all true, although I take exception to the reviewer’s claim that

“When you read this book it almost seems like a real story.”

The Plot: 15 year old Dana Small is the daughter of former actors who now host a local-TV talk show. She has developed a crush on the hunky new kid in town, Seymour Finkelstein.

Now we need to stop right there, because “Seymour Finkelstein” is clearly a nerd-name, like Egbert Dorkleman or Eugene Nerdlinger. Please, can we at least keep our literary conventions straight? If Seymour is a hunk, he should have an appropriately 1980s hunk name, like Brick Hardbody or Beef Slabchest.

Dana confesses her crush to her best friend Andrea, who encourages her to have a party with the ulterior motive of having an excuse to invite Simon Doofenhoffer (See?  I can come up with way better names. Dwayne Dweebenheiser! Quinton Q. Braniac! Irwin von Egghead!)

…Where was I? Oh, yeah, Dana and her ill-conceived party. She invites the debating team as her cover. Andrea steals Seymour away from her and then doesn’t even stay to help clean up!

Dana briefly fantasizes about Andrea introducing a Seymour to her parents, during the course of which a roach crawls up his leg and Andrea’s father demands:

“Are you familiar with Planned Parenthood, and if so, why?”

And that is basically where the Dana-Seymour plotline stops. Onto plot 2, in which Dana’s parents are at risk for not having their talk show contract renewed, because the owner of the TV station wants to muscle them out so he can give the timeslot to his nephew. Dana’s parents first attempt a rating surge by interviewing their own daughter under the guise of a story on the Typical American Teenager. It bombs, especially when her Father addresses her as “Danish” during the interview.

However, the Smalls have landed an interview with tennis start Buzz Janos (which is, admittedly, a pretty okay Hunk Name), which has recently written a best-selling book called Tennis With Buzz. The Smalls parlay the interview into a week-long Buzztravaganza, during which 15-year old Dana and 21-year old Buzz go on a number of dates and make out a lot. Creepy.

But don’t worry, Dana describes her feelings for Buzz as “somewhere between my future husband and a kindly uncle.”

Apparently Seymour is a big tennis fan, though, and when he sees Dana and Buzz around town he starts looking at Dana in a whole new light. No, he’s not jealous. It’s more like his desires for Buzz have been sublimated onto Dana.

And that is basically it. Andrea and Seymour break up and Andrea is last seen having moved on to trying to steal somebody else’s boyfriend. Dana keeps dating Buzz

Sign it Was written in 1983 Department: Andrea does her impersonation of Nancy Reagan being interviewed:

“I buy all of my clothes exclusively in K Mart. Got that? But I’ve seen a few things in Woolworth that tempt me, so I may not be exclusive K Mart much longer. I prefer the adventure of bending over those tables, where you have to shove and push to find your right size, but I do occasionally make a selection from a well-ordered rack.”

Smoove Department: (Buzz upon meeting Dana) “I hope you won’t think it’s a line. But there’s a quality about you that is tremendously appealing.”

Good Name For a Restaurant Department: Dana and her parents go out to dinner at a restaurant called Luigi’s Lair, which has themed rooms including “The Florentine Macho Room”, “The Mona Lisa’s Grandpa Room”, “The Mediterranean Misfit Room” and “Luigi’s Lust”. As terrible as this book was, I totally want to go there! They probably have shag-carpeted booths and a nightly floor show!

This entry was posted in Vintage YA Fiction and tagged 1983, Author S, Dell, Romance, Title I, Young Love. Bookmark the permalink.

5 Responses to I Saw Him First By Marjorie Sharmat