New year, new features, part 2! The third Friday of every month will now be devoted to Lost Classic Teenpics.

And we’ll start it off right, with a Made-For-TV scare-film about an imaginary hitchhiking epidemic starring the teen cast members from my two favorite nighttime soaps, Charlene Tilton (Lucy Ewing on Dallas) and Katy Kurtzman (Lindsay Blaisdel on Dynasty)! And if that is not enough for you, it also stars just about every TV and B-movie actor of the era you could want to see. But all in good time, first we need to remember that Hitchhiking is a Very Serious Thing That Kids These Days Are Into.

As the film opens, a Concerned Female Voice reads aloud some unsourced statistics about how many hitchhiking girls were murdered in the preceding year, as stark white-on-black text rolls, concluding with:

Despite a nationwide pattern of beatings, rapes and murders, young women continue to thumb rides— often from the same street corner where they know another girl hitched her way TO DEATH.

The film then opens with a sunny, hitchin’ USA montage, in which nubile young girls clog the streets and highways from Times Square to the pacific coast highway while the soundtrack merrily wah-chicka-wahs along. Seriously, it looks like a Juicy Fruit gum commercial.

We are introduced to recent high school grad Julie Thurston (Tilton) and her two friends, bony redhead Dana (Karlene Crockett, who played Tilton’s BFF on Dallas; I guess it was a buy-one-get-one?) and sullenly pregnant Cathy (Dominique Dunne, who would star in Poltergeist and then be murdered in real life). 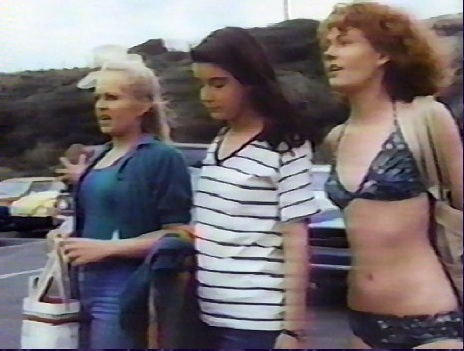 The girls complain about how their parents have moved them out to the suburbs, where the lack of public transportation makes getting a summer job impossible and the city council has stirred up a moral panic about reckless teenage drivers, so now their parents are loathe to even lend them the car.

When they arrive at the beach, one of the beach-studs vies for Julie’s attention by doing push-ups… Wait- is that Peter Brady? It is! Man, he is still having an awkward adolescence. Julie isn’t swayed by his demonstration of physical prowess, instead remaining absorbed in reading her copy of Ceramics Magazine. Oooh. Burn.

When Julie gets home that night, her parents (Katherine Helmond and Dick Van Patten!) deliver a very confusing lecture to Julie about how she needs to do something with her life, like get a job, but they won’t allow her to drive or ride with friends the 20 miles to the nearest town where the jobs are. It really seems like this might actually be a movie about poorly-planned civil engineering. Her younger sister Trish (Kurtzman) helpfully suggests that she could go on welfare.

Ignoring the URGENT NEWS BULLETIN on the radio regarding the murder of yet another girl-hitchhiker, Julie goes to her room to mope and work on her first love: sculpting ceramic clowns.

Well, at least some excitement is about to thumb its way into town, as the Julie’s friend Francine arrives from Beauty College to set up in her own apartment. Bony and Pregnant Cathy join them in painting it purple, and having some girl-talk about how Julie is the last virgin in school. Everyone assumes that she’ll make it with Peter Brady, but Julie isn’t so sure. He’s kind of gross.

The next day she gets a call from the snack bar where she put in a job application, and they want to hire her! But without a car, how will she get there? Trish is immediately suspicious:

Her ride is a sleazebag in tinted aviator glasses… Wait? Is that Craig T. Nelson? It is! Is he going to totally murder her? No, it turns out that he is only menacing her for her own good because he has “a daughter your age and it kills me to see girls dressing like that.” Gross.

Peter Brady shows up in his bitchin’ custom van (two kinds of primer!) to drive her home and offers to do so every day, but Julie is a woman of integrity: she can’t just use him for a ride, she needs to earn the money for her own car herself.

Mom and Dad are pretty mad that Julie gets home so late, but she points out that they are the ones who won’t let her use the car. Dad is insecure that his little girl is growing up: “I just want to feel more important than a car!” Mom offers to cheer him up with old people sex. Gross.

Actually, this is a good time to point out that the whole movie is pretty gross. It has the production values of a high school hygiene film.

At the snack bar the next day Peter Brady and his flapping mustard-colored bell bottoms show up to inform Julie that he’s takin’ off in the van, traveling “anywhere and everywhere” and he wants her to come with him. No thanks.

And now for some hitchin’:

Francine is hitching a ride to Beauty College and is propositioned by an old guy who says that he’ll take her to dinner afterward, but she wisecracks her way out of it.

After turning down a ride from a wacked-out hippie, Francine turns her eyes heavenward and prays for a “normal ride” and is immediately picked up by a Catholic priest. Ha-ha!

Pregnant Cathy is picked up by a bro (did they have bros back then?) in a disco suit in a yellow Corvette. He has a box of sunglasses (murder trophies???) and he makes her wear them while he rapes her. Back at home, Cathy’s mom is so zonked-out that she doesn’t even notice she’s missing. SOCIAL COMMENTARY!

But also confusion, as DEATH CAR is introduced. Is this the same car that Sunglasses Fetish is supposed to be driving around in? It is not clear, since it is only seen in close-up, at various skewed angles, while menacing music plays. 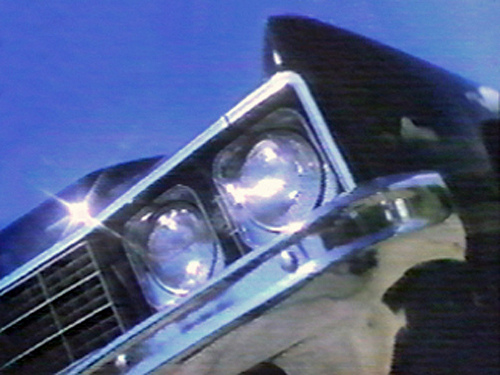 Julie goes with Francine and Bony to visit her in the hospital. They are not helpful, as Julie advises her to forget it ever happened, while Francine offers her coupons for a permanent wave. Bony is only interested the hospital food, then advises her to look on the bright side: at least she had a miscarriage!

The next day, Ron, a man with enormous gull-winged shirts who looks at least 35 takes Julie out on a date, where he encourages her ceramic-clown based career aspirations.

Bony is picked up by Sunglasses Fetish Guy, but when he starts menacing her, she menaces him right back. This causes him to plow into the back of a semi-truck, killing her. DEATH CAR lurks nearby.

So, I guess it is not the same car.

Julie confides in Ron that life seems so meaningless, since it is just a matter of time before she is horribly murdered. Ron, who is wearing some very high-waisted slacks, tells Julie that he wants her to come visit him in L.A. for her 18th birthday. Julie’s parents do not approve, but have basically given up. Her father’s solution: “I guess we better stay on Trish’s good side.”

Ron is an architect. When she goes to L.A. for her birthday, he takes her to the house that is under construction that he’s designed and they awkwardly make-out fully clothed in the bath tub.

Ron takes her to visit a professional artist in his studio, who is really impressed with Julie’s ceramic clowns. He’s all French and stuff, so he totally knows what he’s talking about.

The next morning she gets off the Greyhound in the middle of nowhere and calls home from an impressively futuristic pay phone. Trish tells her that Ron left her a message and she is supposed to go back to L.A. right away- Frenchy wants to give her a scholarship to study ceramic clown-making at the University Level! But uh-oh…

Is this the end of the line for Julie? Or will her carefully-preserved virginity protect her?

It will. She bashes the driver on the head with a ceramic figurine. Yeah! Art!

Back at home her parents tell her how proud they are of her and will pay for her to go to college and study to become a “sculptress”.

Dad summarizes: “They may catch that maniac, but there are more where he came from.”

Bonus: I watched this on a VHS tape (an ex-rental, no less) distributed by LIGHTNING VIDEO; before the end credits even fade out it cuts to a trailer for Joe Don Baker in Walking Tall. Because I guess the audience that has a prurient interest in Charlene Tilton in a halter top also would like to see Joe Don Baker bash people in the face with a 2-by-4. Mitchell!

– Everyone in this movie looks really high.

– Why is Julie wearing a Cub Scout uniform?

– Why is Julie’s Dad drinking an enormous beaker of wine?

3 Responses to Movie Madness and/or Mania: Diary of a Teenage Hitchhiker (Ted Post, 1979)