The Twisted Window By Lois Duncan

This will make the third Lois Duncan title reviewed here in the past year (there is a reason for that, which we’ll get to), this one coming a decade later than the others, but still dealing with dangerously charismatic hunks, feisty teenage heroines, psychic powers and the bleak consequences of hormone-addled decision-making. 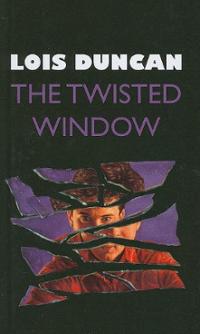 The Plot: As always, Duncan is the master of the slow reveal. As the story opens, naturally psychic (it’s no big deal!) high school student Tracy Lloyd is both fascinated and a little creeped out by hot new guy Brad in the cafeteria, especially when he comes over and strikes up a conversation with her, ignoring her flashy blonde friend Gina (“When Gina went braless under one of her collection of tight-fitting mesh tops, males eyes did usually turn in her direction.”)

Tracy is right to have her guard up, as Brad seems to have made Tracy his mark for a purpose that doesn’t sound entirely wholesome:

He needed a loner, not somebody equipped with a boyfriend. If the quality of her voice was in keeping with her appearance, she might easily be able to pass herself off as old enough to have her own apartment.

Despite her qualms, Tracy eventually invites Brad to telephone her at her Aunt and Uncle’s house, where she has been living since her mother’s death the previous year. Brad doesn’t want to overplay his hand, so he spends the afternoon catching a James Bond double feature and browsing the displays at the local gun shop (foreshadowing!) But since time is running out to enact his plan (which is as-yet unknown to the reader), he decides to pay a visit to Tracy that evening.

Tracy’s home life is unhappy: after her parents’ acrimonious divorce, her mother was killed in a Times Square mugging gone bad, and then her movie star father dumped her with his couch potato in-laws in the small town of Winfield, Texas.

When Brad shows up on her doorstep, Tracy is not surprised both to see him and to learn that he is not a student at Winfield High (psychic!); she urges him to cut the B.S., and he reveals that he’s driven from Albuquerque in search of his ex-stepfather, Gavin, who has kidnapped his two year old sister, Mindy, after divorcing his mother. After the local police proved ineffective back in New Mexico, Brad did his own sleuthing and thinks he’s located them hiding out in Winfield.

Tracy agrees to help Brad with his amateur detective work, and she smooth-talks her way into Gavin’s swingin’ bachelor pad and fortuitously learns from his roommate that he has a brother and sister-in-law in the area. Tracy accompanies Brad on a stakeout of their house and, sure enough, Mindy is living with her aunt and uncle. Touched by Brad’s description of how his mother hasn’t been able to function since her daughter was taken (and their mistreatment by Gavin during the marriage), Tracy agrees to get a job babysitting for Mindy and help Brad kidnap his sister back.

But! This is a case of LITERALLY EVERYONE not being what they seem! After the build-up, Duncan piles on twist after twist in the second half of the novel at a breakneck pace; the payoff is so good  that this is the rare case that I’m not going to give the ending away. You’ll just have to read it for yourself.

Which is why I urge you to check back on Friday, when we will round up some of the new and exciting ways that you can read it for yourself, and how YA Classics (and Lost Classics!) are benefiting from the proliferation of electronic publishing. Charge up your Kindles, Nooks and tablets!

Sign It Was Written In 1987 Department: Brad’s attempts at flirtatious banter are lame even for the 1980s: “Don’t try to deny it. You’ve been hired by Ewing Oil. Your mission is to check out the oil fields around Winfield and let J.R. know which ones to buy into.”

Ladies And Gentlemen, We Have A Title! Department: “The experience tonight had been strange because there had been no dialogue, and as a result her attention had been concentrated on physical detail: on the dimple that appeared in the little girl’s cheek when she smiled… on the look in Gavin’s eyes when he bent to lift Mindy from the seat, the glint that the twisted window had portrayed as tears.”

26 Responses to The Twisted Window By Lois Duncan