I’m not shy about doing my reading for this space in public: that is what a commute is for. And so far, nobody has ever questioned me about why a grown woman is so intensely absorbed in, and furiously scribbling notes in the margin, of what is clearly a 30 year old paperback with a patently ridiculous cover. Maybe my fellow commuters are really good at minding their own business and not noticing (I know I’m not: two years later I am still intrigued by the burly, construction worker-looking guy I spotted reading The Baby Sitter’s Club #8: Boy-Crazy Stacey during rush hour on the M train).

But! For those who might hesitate to look ridiculous in public, this modern age offers the equivalent of plain brown wrappers in the form of e-books. (Or maybe you just don’t want to cram your house full of moldering paperbacks. I will not judge!)

Digital formats can be a boon for vintage titles, including those which have been long out-of-print.

In 2012, Open Road Integrated Media began offering a number of Lois Duncan’s older titles as e-books, including this week’s selection, The Twisted Window, complete with updated (and much less literal) cover-art… 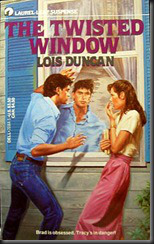 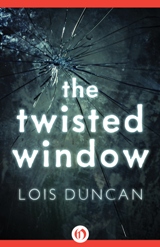 Remember how I promised that you would be hooked from the first pages? Well, here is your opportunity to peruse before buying:

View this document on Scribd

Other Lois Duncan titles, including Ransom (1966), They Never Came Home (1969) and the true crime memoir Who Killed My Daughter? (1991), about Duncan’s investigation into the still unsolved murder of her daughter, are available through a number of online retailers, including Barnes & Noble and Amazon.