The Amboy Dukes By Irving Shulman

Irving Shulman’s novel about delinquent Jewish teenagers in the Brownsville section of Brooklyn was a publishing sensation upon its release in 1947, selling five million copies. It was also widely condemned as “pornographic” and reportedly banned altogether in Canada. Almost 70 years later, the book still occasionally shocks with its brutality, but also with its pessimism: in the post-Depression urban ghetto, everyone is corrupted and no one will be redeemed. 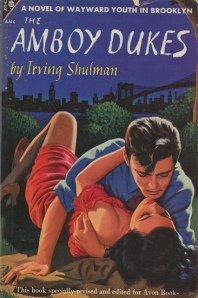 Background: There have been numerous editions of the novel published in paperback, which have been abridged and altered from the original text. I presume some of the sex and violence was toned down in these editions, but the names of the characters were also changed to be less obviously Jewish: Alberg becomes Andrews, Goldfarb becomes Abbot. The edition I have is a 1971 Pocket Books reissue, with a brief author’s note that states that it is “exactly the version that I intended it to be read”, so I assume it is the text that appeared in the original hardcover publication.

The Plot: Set early in the summer of 1944 (with a brief prologue in 1942), the book deals with the unexpected fallout of the wartime economic boom in poverty-ravaged Brownsville. After a decade of scraping by on Federal Relief, 16-year old Frank Goldfarb’s Depression-scarred parents eagerly take overtime shifts at the local munitions plant and the Brooklyn Navy Base, leaving Frank and his 11-year old sister, Alice, to more-or-less fend for themselves. The Goldfarbs view this as the opportunity to put aside money to move out of Brownsville and send their children to college; Frank takes the opportunity to start cutting school and running around with the Dukes, one of the many gangs that have sprung up in the vacuum of parental absence:

The neighborhoods of Brownsville, East New York and Ocean Hill were infested with gangs. The Pitkin Giants, the Amboy Dukes, the Sutter Kings, the Killers, the D-Rape Artists, the Zeros, the Enigmas, the Wildcats, the Patty Cakes were just a few of the gangs the fought, slugged, and terrorized the neighborhood. They fought for the sheer joy of bloodying and mauling one another, and no insult was so slight that it could not be used as an excuse for a mass riot and free-for-all.

The other authority figures in the neighborhood are ineffectual, to say the least: Mr. Bannon, the shop teacher at New Lots Vocational High School is both fed up with and overwhelmed by his charges (“All of his pedagogy was no damned use. How in the hell could he keep his temper when these little bastards made his life so miserable? Why couldn’t he haul off and clout that smirking Benny Semmel in the mouth?”); Stan Alberg, the former gym teacher who now runs the local JCC, naively believes that he can cure Brownsville’s societal ills with enough basketballs.

Frank sets out Monday morning by packing his voluminous suit with “reefers”, condoms, and a shop-class zip gun, and heading into Manhattan for a day of cutting class. Accompanying him are hard-drinking Benny Semmel , mentally unstable Leon “Crazy” Sachs, and Crazy’s unwillingly appointed friend and minder, Mitch Wolf.

The first third of the book is pretty much a series of incidents predicated on shock value, as the boys grope a woman on the subway, pick a fight with a Puerto Rican gang from Ocean Hill, pick up some “fast” high school girls at the local movie theater (“We’ll kiss and swap spits”), get high, get drunk and round out the evening by beating up and robbing the middle-aged prostitute who has just serviced them.

When the plot finally gets started, it hinges on only two incidents; the first is the killing of shop teacher Mr. Bannon. When Frank and Benny decide to attend school midweek, they immediately become the ringleaders in a classroom disturbance. When the school’s principal orders the entire class suspended until they each bring a parent in for a conference, Benny and Frank are more afraid of facing their parents than anything else: this is going to cut into their overtime at the factory and they are not going to be happy about that.

When Benny and Frank return after class to try and reason with Mr. Bannon about his “interfering with the War Effort” the situation degrades pretty quickly: Bannon has been on his last nerve for quite a while, and when Benny questions why he hasn’t enlisted in the military, things get physical and Bannon is determined to beat them to death. In the confusion, Benny’s gun goes off and Bannon meets his end with a remarkable economy of prose:

Mr. Bannon wavered, looked at them unbelievingly, then staggered forward to the desk, grasped the edge, collapsed and died.

Frank and Benny are now reluctantly bound by their shared involvement in the teacher’s killing. As the local police bumble through the investigation, Benny becomes increasingly paranoid that Frank will rat him out, while Frank tries to play it cool and get rid of the gun, convinced that if they can make it through the last few weeks of the semester the cops will let the case go cold over the summer.

They might have gotten away with it, if Benny’s increasingly erratic behavior didn’t tip off Crazy to the fact that something was up. Frank basically digs his own grave when he gets Crazy’s 12 year old “girlfriend”, Fanny Kane, to stand Crazy up and go out with him instead.

The second event that drives the plot (really, only two things “happen” in the entire book) is a dance thrown by the Dukes to raise bail for the members being held “on suspicion” in Bannon’s death. In addition to selling tickets, the gang plans to pick the pockets and handbags in the mandatory coat-check, and then beat up the band rather than paying them at the end of the night.

Terminally unable to keep a low profile, (and not grasping how dangerous Crazy really is), Frank gives a ticket to Fanny Kane as a joke. She shows up just as the Dukes are preventing a riot from occurring when Crazy wants to slice up some rival gang members. To keep him quiet, the Dukes hand over Fanny to him.

By the next morning the entire neighborhood knows that Fanny was raped, and that Frank was the one that gave her the ticket to the dance. While most of the neighborhood is distressingly in agreement that Fanny was headed down a bad road and this sort of thing was inevitable, it is only Frank’s parents that seem to grasp the horror of the situation, both holding their own son partially responsible and urging the Kanes to report it to the police.

Feeling betrayed by both his parents and the Dukes, Frank attempts to make a anonymous phone call to the police to tip them off to Benny’s involvement in Bannon’s murder, but the detective calls his bluff, addressing him by name. Turned away by his parents and younger sister, Frank escapes onto the roof of the apartment building, when Crazy suddenly appears to push him over the side:

With flaying arms and legs Frank fell and hit the rail of the third-story fire escape, then caromed out in an arc toward the street, screaming his life away.

While the descriptions of Brooklyn in the 1940s are very interesting (here is a neat article about Brownsville today, focusing on the Pitkin Theater, which plays a role in a pivotal scene in the novel), the overall effect is just lurid and depressing, as the reader is repeatedly hit over the head with Shulman’s CRIME DOES NOT PAY message.

The book was adapted as a movie, City Across The River, in 1949, although the characters were again goyified: Alberg becomes Albert, Goldfarb becomes Cusack, and Semmel becomes Wilks. It is notable as being the feature debut of Tony Curtis (as Mitch).

A decade later Shulman would tackle suburban delinquency by adapting Rebel Without a Cause for the screen.

Sign It Was Written In About 1944: The gang’s main source of income is selling counterfeit gasoline ration coupons; the wartime housing shortage is so bad that even though they can now afford to move out of their slummy Brownsville apartment, the Goldfarbs can’t find any place to go to.

Law & Order: Exiled Department: “All right, men,” Macon began the discussion, “you know why we’re here. The mayor and the police commissioner have given us orders to break this case or else. And” – he cleared his throat – “I don’t want to think about that or else while pounding a beat in Staten Island.”

Venereal Disease, You Should Want to Contract? Department: “Phui.” His mother spit into the sink. “Dates with junge stinkerkes and bummerkes are something special. Better you should be careful that you don’t come home someday with a krank from one of your special dates. Ask him, Meyer, if he doesn’t know what I mean. I read in the papers that they got a two-day cure for it now. At least we’re lucky for that.”

14 Responses to The Amboy Dukes By Irving Shulman