Published by Scholastic between 1959 and 1985, Co-Ed’s somewhat confusing tagline was “The High School Magazine For Homemakers and Career Girls”, which covers pretty much every group of young women except collegiate co-eds.

The content isn’t all that different from the other teen mags of the era: recipes, fashion, readers’ letters, fiction. The supposedly “educational” thrust of the magazine’s mission can be seen in the reduced amount of advertising; instead, the companies get sneaky with the product placement, such as the hairstyle column sponsored by Toni and the beauty tips that all seem to involve Pond’s cold cream.

Another article takes a peek at home economics behind the iron curtain (SEE WHAT I DID THERE!) at a Moscow high school. Co-ed’s editors clutch their collective pearls at the Russian’s teen’s assertion that she expects her husband to pitch in with the household chores:

Nearly all Soviet girls are of the same opinion. They have good reason for it. Women comprise 48 percent of all the people employed in the USSR. The have “taken away” professions from men, especially in the field of health protection and education. For equal work women receive equal pay and have the same opportunities as men to improve their education and skills. However, according to most people, to achieve complete equality of the sexes, women must be freed from some of the household chores in which they are now engaged.

Another article urges teens to invest in the booming mobile home market!

When you daydream about a home of your own, you probably envision a rose-covered cottage or a sleek split level. But the odds are high that your first home will be a mobile home! That’s what every tenth new home sold today is, and a large percentage of these mobile homes are bought by newlyweds.

There is even a quiz you can take to test your knowledge!

True or False? The “sociability” that is a part of many mobile homesparks can be pleasent if other residents are congenial.

Just make sure you don’t live next door to Divine and Mama Edie! (Or do, if that’s what you’re into, I guess.)

Let’s go to the Reader’s Letters. This month, they are weighing in on whether a college education is essential:

If one goes just because the crowd does or to find that “someone special” to marry, it is useless. The idea that one will get you a good job just because one goes to college is misleading.

As true today as it was 40 years ago. Although there may be hope for me yet, as I have heard there is a shortage of scholarship on television of the Kennedy-Johnson era.

Going to college is almost becoming a necessity. One surely cannot lose anything; he stands to gains great deal: social position, higher income, and, more important, the ability to better analyze life and its complexities.

I predict that Bob is going to smoke a lot of weed in the coming years.

[N]ot every man (and certainly not every woman) should go to college. We can’t become a nation of thinkers and no workers.

Jim: killed in Vietnam by his own troops.

Let’s take a look at some of the Ads… 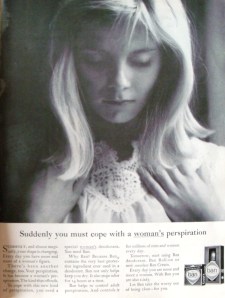 It’s that special time in your life, when you transform into a woman! From an anteater or a robot or whatever you were before. 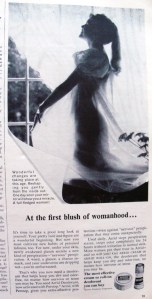 This ad is pretty racy for 1964. I think I figured out why Bob and Jim had a subscription to Co-ed. Also, that tagline: barf! 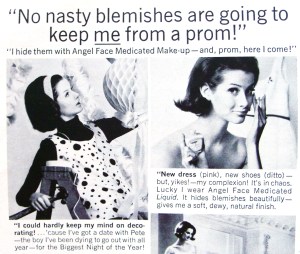 “Yikes, my horrible face-boils are the size of these decorative crepe-paper balls!”

Finally, as promised on the cover, full-color instructions on throwing a bridal shower for your friends who received “a ring by spring”. Look at all of the things you can frost, glaze, mold out of gelatin and make from space-aged powders! 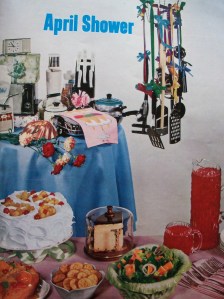 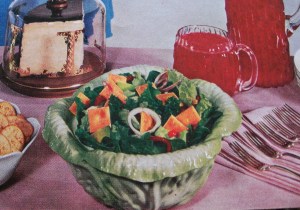 …are those Cheez-Its in the salad? I give up. Go ahead, put Gummi Bears in tomato soup or Funyuns on a cake. This is why the Commies are winning the space race.

This entry was posted in Magazines and tagged 1964, Co-Ed, Magazines. Bookmark the permalink.