Posted on December 3, 2013 by mondomolly

This week’s featured title is first installment of Cynthia Blair’s 13-volume series featuring the Pratt Twins, who in the best Sweet Valley tradition, are constantly switching places in order to solve mysteries and foil antiques smugglers and KGB agents, all while under the umbrella of a cute dessert-or-snack food-themed title.

Sigh. It is far, far more tedious than I am making it sound.

Since this is the first book in the series, Christine “Chris” and Susan “Sooze” Pratt haven’t worked their way up to international super-spy status yet, so their switching places is just a social experiment to see if they can trick their friends and teachers for two weeks. This is what teenagers did before the internet.

Their parents are totally OK with it, because it’s only for two weeks, and therefore it’s not like too many tests will be plagiarized! 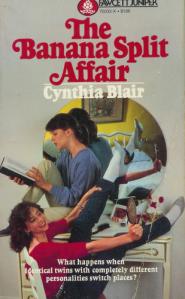 The Plot: Chris is the outgoing twin with a gazillion boyfriends who always goes along with the crowd; Sooze (or as I started automatically reading it “Snooze”) is the shy “egghead”  (love the totally up-to-date 80s slang…) who is good at art and doesn’t often leave her room.  The twins decide they want to learn what the other’s life is really like so they make a wager that they can switch places for two weeks. If it works, Snooze has to buy Chris a banana split. If it fails, Chris has to buy eternal wet blanket Snooze one.

So… clearly Snooze wants to be Chris for two weeks because, duh, popular. It is unclear why Chris would want to be her sad-sack sister, so the author makes up something about how Chris wants to know what it’s like to be admired for her artistic ability. Also, in order to make the screechy Chris more likable, she will somehow get Snooze’s art-class crush, Keith, to ask Snooze out.

Unfortunately, Chris’s plan works too well and Keith asks out the still-disguised Chris. So she has to date Keith for the two weeks that she is pretending to be Snooze.  This is a change of pace for Chris, who is used to hanging out with people like  “that horrible Richard” because his brother owns a liquor store, and therefore gets asked to all of the best parties.

“What usually ends up happening is that the boys go outside and fight each other and the girls throw up all over their pretty party clothes. The boys go home with black eyes and the girls go home crying.”

Meanwhile, Chris has been playing the part of her sister a little too well and is now madly in love with Keith.  They have a lot of really deep conversations about stuff that Chris doesn’t know anything about:

“Funny you should say that,“ Chris said quickly “I like them too.”

“I love their use of color”

“I ADORE Renoir!” she cried “That’s my very favorite painter!”

At this point Snooze’s plot has pretty much been abandoned, so the author decides to have her be the witness to a car crash involving a cute boy named Jason, who goes to another school. Of course, she immediately falls in love with him, and they keep going on dates despite the fact that she is trying to keep up the charade that she is her popular and outgoing sister.

This doesn’t make any sense because Jason seems like kind of a dick:

“It seems like every time I start to relax and have fun, you make some crazy remark that ruins everything!”

Aside from that, two weeks pass without incident. Even the litigant in Jason’s car crash decides to settle out of court, so the author stops just short of condoning perjury in the name of this wacky “social experiment”. Chris and Snooze plan to meet with Keith and Jason and reveal all to them, fairly confident that they will be totally accepting of being party to the most boring social experiment ever.

Shut up Jason, nobody wants to hear your philosophies.

Sign it was Written in 1985 Department: “And don’t forget that instead of gym third period, the class is going to the auditorium to see a hygiene film.”

Ladies and Gentlemen, We Have a Title Department:  “It’s called The Banana Split Affair. Like in spy movies. Doesn’t it sound mysterious?”

(This is actually kind of a cheat, since they are constantly reminding us on every page that THIS IS THE BANANA SPLIT AFFAIR!!!!)

On Artistic Integrity Department: “A true artist doesn’t paint for other people. He- or she- paints for himself. To soothe something burning inside so fiercely that it has to be communicated to the rest of the world.”

Unexplained Department: It appears that in the United Kingdom the series was marketed under the name “Mystery Masquerades” and featured an entirely different set of twins on the covers.

This entry was posted in Vintage YA Fiction and tagged 1984, Author B, Fawcett Juniper, High School, Identity Swap, Romance, Title B, Twins. Bookmark the permalink.