Three was never a crowd before… 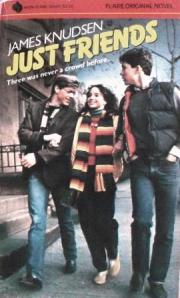 The Plot: Suburban Chicago high school junior Blake Webb has been desperately lonely since his best friend moved away at the end of the 8th grade, and he has spent his entire high school career trying to follow Dale Carnegie’s advice on winning friends and influencing people. His classmates seem to like him well enough, but he just hasn’t been able to really connect with anyone.

Blake’s existential crisis comes to an end when Libby Esterly, a grade-school acquaintance, passes him a note in his English class that changes his life:

Campus cuties and smoothies to meet at the Northwestern Station for the 8:26.  Agenda to include movie- bring shuckles!

While Blake has to consult with his father on what exactly a “shuckle” is (“Money. Moola, mazooma, shuckles and lucky bucks. Those are Depression-era terms”), he is intrigued by the aggressively eccentric Libby’s invitation. He arrives at the train station only to find that that sum total of Valley Park’s “campus cuties and smoothies” are Libby, himself and sophisticated New Kid In Town, senior Spencer Fredericks

“How do you do,” said Spencer in a voice that made him sound about forty-seven years old.

Blake takes an immediate liking to Spencer and is happy to renew his friendship with Libby, a girl that he has no designs on whatsoever. He swears:

Libby just wasn’t the kind of girl you’d take on a date. If you’d asked her, she would have treated it like a joke and would have met you at the door wearing a carrot corsage.

I got the impression that being serious embarrassed her.

After a day of shopping used book stores, Thai food and a Fellini festival, the trio is inseparable, and Libby and Spencer even convince Blake to stop moping and get involved with the Human Relations Committee (“not as sexy as it sounds”), a student club devoted to outreach to underprivileged inner-city students.

Blake also finds himself entralled with Spencer’s family, glamorous college professors who have traveled the entire country, failing to make tenure. Blake loves spending time with “Carol and Rob”, discussing politics and drinking Mexican coffee in their house full of antiques, almost as much as he does with Spencer.

Blake is so enchanted with his new friends that he fails to notice the discontent stirring around him as the fall progresses. He is annoyed and uncomfortable when Libby comes on to him, playing it off like a joke, but then angry when she starts spending time alone with Spencer, bonding over their shared love of folk music. He’s also confused by Spencer’s frustration of his not taking the HRC as seriously as the others; Blake openly questions what good a bunch of white suburban kids can really do in sponsoring a one-day “exchange” with a “black inner-city school”.

Things come to a head when Blake attends a weekend trip with the HRC to visit a home for juvenile delinquents and unwed mothers in Indiana, which leaves him deeply depressed.

Upon their return home, Spencer and Libby seem to be making themselves scarce, and Blake finds himself spending more and more time with Rob and Carol and Mrs. Esterly.

Blake still hasn’t figured out what is going on (he’s pretty dense), when Spencer has a breakdown at school, tries to disband the HRC and then gets into a shoving match with an assistant principal. Libby’s mother spills the beans, and in one swoop Blake learns that Spencer and Libby are dating and the Fredericks are getting a divorce: Carol has been having an affair with the HRC advisor.

And that’s about it. For a book that is so light on action, it is a surprising page-turner; not much happens, but it is very well written, with a bunch of interesting and relatable characters suffering through the tandem crises of adolescence and middle age.

Blake is an unusual character for the genre: a late-blooming male. When Libby (and a later another classmate, Flori) express a romantic interest in him, he shies away, despite his palpable loneliness.

And that loneliness is pretty agonizing throughout the entire book, and not just for Blake- the parents especially just seem to want somebody (anybody!) to talk to, Libby’s mother at one point sighing

“Nobody wants to talk to mothers- they’re just an obstacle on the way to your friends.”

While Spencer and Libby double-date with Blake and Flori to the junior prom, it is clear that their friendship has irrevocably changed. Instead of spending the summer together, Spencer leaves for college early and Libby takes a job as a camp counselor without even telling Blake she’s leaving. However, Blake remains cautiously optimistic that

I’m pretty sure Spencer and Libby and I will be friends for life. Someday I suppose we’ll laugh at ourselves, but right now I’m only at the stage where I think I finally understand what happened.

“Get this… Juanita said he was dressing too sexy. He had on this flesh-colored undershirt and tight jeans. Roger accused him of ‘emphasizing his crotch’.”