Checking In With The Imaginary Summer Book Club: No Bed of Her Own By Val Lewton

Click here for information on the 2014 edition of Molly’s Imaginary Summer Book Club Featuring Classics of Women’s Literature. As all of the four selected titles have filmed adaptations, we will be looking at the movie versions as we go along. This month, the July selection, Val Lewton’s No Bed of Her Own.)

Val Lewton is best known as the producer of a dozen low-budget horror and suspense films for RKO Pictures in the 1940s: titles such as Cat People, I Walked with a Zombie, The Leopard Man, and Curse of the Cat People promised more lurid tales than the stylish, eerie films Lewton actually delivered.

Lewton had started work in Hollywood as an assistant and story editor for independent producer David O. Selznick (he is responsible for the Atlanta depot scene in Gone With the Wind, as well as work on A Star is Born, A Tale of Two Cities and Rebecca); however, the work that first brought him notice in Hollywood was this scandalous pulp novel about a young woman’s slow slide into prostitution during the brutal New York City winter of 1931.

20ish Rose Mahoney is an outstanding secretary, but her insolence towards her smarmy toad of a middle-manager puts her in the crosshairs when the department starts weeding out “redundancies”; Rose thinks she’s going to have the last laugh when he gets pink-slipped himself.

But a job (any kind of job) isn’t as easy to find as it was in 1929, and Rose’s fortunes begin a gradual-but-inevitable downward spiral. Along the way, Rose finds brief respites in a sort of underground economy of women, as she throws in with friends (and former nemeses), co-workers and total strangers to share lodgings, food, jobs and childcare. Abandonment by husbands and boyfriends is a recurring theme: men leave their wives and children behind so they don’t have to see them “suffer” and treat it like a noble gesture.

The novel has a surprisingly contemporary feel, and Lewton has created a bustling, multi-ethnic, -religious and -racial (and -racist) vision of New York City which remains decidedly recognizable more than 80 years later.

The other aspect that feels ripped from the headlines is Rose’s stubborn inability to present herself as the “right kind” of poor. Lucky enough to have a few new pairs of stockings and a decent dress to her name before she was fired, she finds herself the object of contempt as she tries to seek out help from the primitive social safety net:

The desk clerk frowned. This seemed impudence on the part of one who came as a suppliant. She was sorry the rule of the institution forbade her to turn the girl away, and thankful at the same time that there were rules to help her in an exigency of this sort. Plainly, the girl was not one who merited the aid of the Y.W.C.A.

It is exactly this kind of judgment that leads to the novel’s final, doubly-tragic climax.

Despite the fact that Rose is not a virgin (page 28: “Rose was not a virgin”) and the reader is let in on the fact that “not that Rose’s moral scruples were strongly set against such practices”, she remains reluctant to sell herself outright. Only after attracting the notice of a handsome merchant marine at a Times Square movie theater, and admitting to herself that she would allow him to pick her up anyway, does she reason that she might as well be picked up and make $40.

Rose’s moral stance on the subject becomes progressively more elastic as the winter wears on, especially after she hitchhikes home to Athol, Massachusetts for Christmas and finds that pretty much her entire family has found themselves on the same slippery slope. Her father’s business has gone into receivership, forcing her parents to take in a boarder who is sexually blackmailing Rose’s mother, who is terrified at the prospect of losing their only income. Meanwhile her brother has been fired from the Boston police department and is working as a door-to-door salesman, offering sexual favors to lonely housewives on the side.

After that depressing holiday, she is open to a suggestion from the driver she thumbs a ride from: he works for a clockmaker that employs a number of young men- perhaps one of them would like to take her on as a live-in girlfriend.

Rose’s luck seems to change at last, as she is selected by Waldo Gardiner, a pleasant and industrious man that is genuinely appreciative of Rose’s efforts as a “wife”, especially as she supports his efforts to become a writer by putting her secretarial talents to work typing his manuscripts. If it’s not true love, they forge a mutually warm, companionable relationship together.

Rose also welcomes the social life that Waldo’s college chums provide, who admire her as a sort of novelty:

Her frankness and her calm acceptance of her unusual relationship with Waldo appealed to their sense of Bohemianism. They prided themselves on their liberal viewpoint on such matters, but found few girls who would accept their theories and put them into practice.

But the idyll with Waldo is short-lived: when he is laid off from the clock company and is unable to make a go of it as a writer, he leaves Rose to return home to his parents, offering a lame excuse that to stay and struggle together “wouldn’t be fair to either of us.”

Rose is left in Waldo’s apartment like rest of the furnishings, with the unspoken understanding that she’ll take up with new tenant. Unfortunately, the new guy, Fritz, is a mean drunk who works in advertising, and he’s crowding the apartment by bringing along Alfred, his old roomie from Yale. When she takes up with Alfred, things become too complicated and Rose walks out on both of them.

With nowhere else to turn, Rose renews her acquaintance with a woman named Barbie, and her circle of bohemian (read: gay and lesbian) friends. While it had been darkly hinted that Barbie engaged women for the most degenerate of activities, Rose learns that her main source of income is staging nudie shows for rich people’s parties. After all she’s been through, Rose’s employment as a burlesque ring-card girl seems more benign than any other option she’s presented with.

Lewton’s depiction of Barbie is really interesting. It is implied that she is a drug addict, and the mysterious nature of her activities (and her butch girlfriend) are played for maximum salaciousness throughout the book… and then she turns out to be one of the most sympathetic characters, offering food, shelter and the shirt off her back to Rose in her most desperate hour. Through Barbie’s generosity, Rose manages to get back on her feet, finally securing a new secretarial position with a boss who appreciates both her aptitude and her spunk.

But Lewton refuses to give his readers a happy ending. The day before she is to start her new job, Rose goes to visit her old roommate, Julia, and her son, and finds them living in squalor and desperately ill. A neighborhood doctor has written a prescription for the baby, but Julia is too ashamed to admit that she doesn’t have the $4.00 to fill it.

Rose desperately races around the city, calling upon all of her old acquaintances to scrape up the $4.00 but everyone is as broke and desperate as she is. Finally, she throws herself at men in the street, frantically declaring “I’ll do anything for four dollars!”

We never learn (exactly) what Rose had to do to get the four dollars, but when she returns to Julia’s apartment, it is too late and the baby has died and Lewton twists the knife: the doctor had noted on the script that it should be filled at no charge, but the pharmacist saw Rose spending her last 25 cents on a cab and decided that if she had money for a taxi, she must have money for a prescription.

This final injustice breaks Rose, stripping her of the compassion she had maintained throughout her ordeals.  When Alfred finds her and asks her to marry him she dismisses him with a sneer:

She would be inhumanely cruel. Self-assertive, immoral, industrious- anything; whipping herself on to become rich and secure. That was what mattered. And poverty was the crime of crimes.

Paramount Pictures purchased the rights to the novel upon publication, intending it as a vehicle for Clark Gable and Miriam Hopkins: 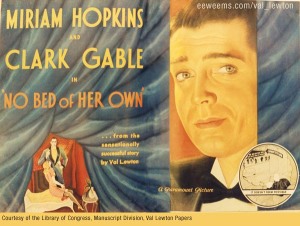 However, as noted in afterword to the 2006 reissue of the novel, Paramount must have bought it without reading it, because even in the Pre-Code era, the book is basically unfilmable. After a dispute over billing, Miriam Hopkins bowed out and a new screenplay was commissioned. Eventually, even the association with the title was decided to be too scandalous, and the film was released in December of 1932 as No Man of Her Own, starring Gable and his future wife Carole Lombard.

The result has no relation to Lewton’s work, instead telling the story of a dapper card shark (Gable) who goes on the lam and meets restless small-town librarian Lombard. When she matches him wisecrack-for-wisecrack they impulsively marry and (surprise!) she reforms him.

The movie is cute, and showcases the two stars at their sexiest (it would be their only appearance together), but it clearly not in the same league Lewton’s wrenching indictment of a society where no one wants you to catch a break.

Unfortunately the book is again out of print; check Amazon and Amazon.uk for used copies.

The film is available on DVD from Universal Cinema Classics, featuring a nice introduction by Turner Classic Movies’ Robert Osborne.

1 Response to Checking In With The Imaginary Summer Book Club: No Bed of Her Own By Val Lewton