The Changeover By Margaret Mahy

He offers her life, death or the supernatural- but the choice she makes must be her own. 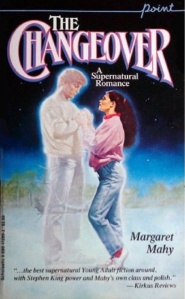 Regular readers know that I love the dissonance between a book’s cover art and the actual content. Clearly, Point (Scholastic) is trying to repackage New Zealander Mahy’s coming-of-age-story as a high school romance- however, the actual story is more A Wrinkle in Time than Twilight.

Unlike most of her friends, Laura is happy to live a low-key and anonymous life. Finances are spread thin after her father left the family for another woman, since child support comes erratically and her mother’s job at bookstore doesn’t pay much, but Laura is content with the daily rituals of school, babysitting her brother and late dinners with her mother.

Laura is troubled only by the rare psychic urge, which send her into a panic. Laura received the first of these “warnings” as she calls them years earlier, on the day her father walked out on them. The second came on the day Sorrenson “Sorry” Carlisle, the long-lost scion of one of Christchurch’s founding families, arrived at school. While everyone else regards Sorry as bright student, with a detached air that made him instantly cool, Laura knows with absolute certainty that he is a witch.

Laura receives a third warning one ordinary morning as she is getting ready for school, and unable to convince her mother to heed her (or even, really, what she is being warned against), Laura is helpless as her family’s life is turned upside down in the next 24 hours.

When she gets to school, Sorry Carlisle deigns to look at her, a lowly fourth-former (if I’m remembering my Harry Potter correctly this translates into “high school freshman”); Laura doesn’t know whether she is attracted to or terrified of Sorry.

He had grey eyes with the curious trick of turning silver if you looked at them from the side. Some people thought they looked dependable, but to Laura there was nothing safe about them. They were tricky, looking-glass eyes with quicksilver surfaces, and tunnels, staircases and mirror mazes hidden behind them, none of them leading anywhere recognizable.

He had suddenly appeared the previous year and taken up residence at Janua Celi, the vast estate inhabited only by his mother, Miryam, and Grandmother, Winter, with vague explanations about having been “away”. Nobody in Gardendale was even aware that Miryam had a son, although the Carlisles’ eccentricities make it easy enough to explain away (Laura’s mother insists that “They’ve got the sort of craziness that gives them class!”)

Things start to go awry when Laura picks her brother up from the babysitter and they stop in the new “white elephant” shop that has opened in a vacant storefront where they have a disturbing encounter with the shop’s owner, an outwardly jovial man named Carmody Braque. He upsets Jacko by rubber stamping a weird, leering face on the back of the boy’s hand. Jacko is so distressed that Laura takes him to the bookstore where their mother is working, only to be brushed off because she’s busy flirting with a customer. Laura is only able to get her mother’s attention the following day, when Jacko has become gravely ill and Laura is convinced that Braque had something to do with it. When her brother is hospitalized and the doctors are baffled over his condition, Laura decides to seek out Sorry and his presumed witch-powers for answers.

Structurally, the book is really bottom-heavy and takes a long time to actually go anywhere. We get a lot of background on the breakup of Laura’s parents’ marriage, as well as her mother’s budding romance with the book store customer and the tension that causes between mother and daughter.

There is also Sorry’s whole backstory, as we learn that Winter and Miryam are also witches (duh); Miryam assumed that she would have a daughter to carry on the witchcraft tradition, so when she gave birth to what she assumed was a non-magical dud-son, she had him adopted by a family in another part of the country. The fact that his family didn’t claim him until he showed signs of being a rare male half-witch is still a source of resentment.

However, Sorry does offer up the information that Carmody Braque is probably a lemure, a demonic spirit that drains away the life-force of unsuspecting victims. The Carlisles think the only way she can save Jacko’s life is to put her own mark on Braque, and that will totally be easier to do if she becomes a witch. With her brother near death, Laura agrees to… The Changeover!

Which, in the longest passage in the book, is a vision quest that involves haunted forests drinking blood:

Once the road divided , but the true path was always marked by her own drop of blood and she followed it faithfully. On her right the unicorn knelt to dip his horn in a pool of water, watched by the pale, radiant eyes or primroses; on the left, three hanged men dripped and fell to pieces among shining flowers, while beautiful butterflies fed from their corruption as readily from the honeysuckle and wild roses.

Is there a semiotician in the house?

The important thing is that she comes through it and she and Sorry set out to trick Braque into getting a magical rubber-stamp on his own hand, which they do. Jacko immediately starts to improve, success, end of the story, right?

Not quite: although Braque begins to wither away at the same rate Jacko returns to health… he will not leave Laura alone, lurking around her school even as he is starting to decay from the inside out.

His and Laura’s final confrontation is the one genuinely creepy part of the book, as he begs her to reverse her spell, explaining that after thousands of years of vampiric living, he has become addicted to the sensuality of the human condition, as well as a connoisseur when it comes to his victims:

“And then I’ve fed on so many by now I’m very, very choosy. Girls like you, with rather more vitality perhaps, or sleeker, or those younger still- eight is an attractive age I think, ten is almost too old… But one should never make hard and fast rules.”

So, maybe all of this soul-sucking is an elaborate pedophilia/stranger-danger metaphor?

Laura is firm in her resolve to show no mercy, and Braque withers up into a pile of leaves.

Sorry tells her that he’s going to forestry school, so they have a few more years to decide if they’re destined to be together forever, but they can still have psychic conversations in their heads in the meantime. It pretty much seems like this witch thing is going to be NBD after all. The end.

“I wish you’d keep clear of it. There are a lot of rough types there and I don’t want you getting into any trouble you can’t handle.”

She was speaking of the Gardendale Video Parlour where Space Invaders machines peeped and sang all day. It was always alive with young men who couldn’t get work and had to kill time, as well as children playing truant from school.

2 Responses to The Changeover By Margaret Mahy