The Late Great Me By Sandra Scoppettone

My name is Geri Peters. I’m your average girl next door: an alcoholic at seventeen. 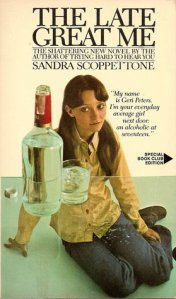 This week’s title comes courtesy of Michele, the Lost Classics reader who supplied the answer to “What was that Sandra Scoppettone book where the heroine hides her liquor in a Jean Naté bottle?”

The Plot: Scoppettone, like her contemporaries Norma Klein, Judy Blume and ME Kerr, excelled creating complex, not entirely likable, but still sympathetic and relatable main characters. More importantly, she also creates parents and authority figures that are not just out of touch or preoccupied or clueless, but downright incompetent. The combination elevates The Late Great Me above other YA novels dealing with drugs and alcohol (a rather pedestrian subject by 1976)- without the pat resolutions of The Boy Who Drank Too Much et al, Geri’s descent into alcoholism (and the fissures in her suburban home life that it exposes) result in a novel that is consistently harrowing.

16 year old Geri Peters, a Long Island townie,  is a lumpy and unpopular high school junior, plagued by a mother, Ginger,  who is stuck in the past and obsessed with her daughter’s “B.P.” (bad personality):

Ginger also accuses her husband, an ineffectual engineer, of having “B.P.”, although both parents lavish praise on Geri’s older brother, Jack, a popular, Harvard-bound senior who is also a raging hypochondriac, which is the only thing Geri likes about her brother because it is the only thing that makes him human.

Ginger is especially critical of Geri’s only friends, fellow unpopular misfits Carolyn (who looks like she’s 45 years old and wants to be a mortician) and Betty Jean (called BJ and who relates more to animals than she does to other people) and who according to Ginger “have the worst cases of B.P. I have ever run across.”

Which is why Geri is shocked when Hunky New Guy In Town Dave Townsend plops down in the seat next to her in homeroom and asks if she likes the Rolling Stones. More miraculous still, he asks her out on a date! While Geri is terrified that he’ll learn that she is one of the “freaks” and cancel, he’s unfazed by the attention he receives from the POPULAR girls in their class, and he takes Geri to the local make-out beach, where he presents her with a bottle of the finest hobo wine. When she questions him, Dave admits that he picked Geri because he could tell she wasn’t a square, and if she wasn’t a drinker, she would be easily corruptible.

The night doesn’t end well, involving a concussion, a trip to the ER and a totally made-up story about being jumped by a biker gang- but even through her hangover the next day, Geri recalls that being drunk sure felt niiiiiiice and she’s eager to repeat the experiment.

Fellow losers Carolyn and BJ are easily convinced to host a drinking party, especially when Dave agrees to bring some of his friends along as “dates”. Carolyn ends up barfing all over herself and Geri makes out with Dave’s gross delinquent friend, while BJ yells at everyone (“Just who do you think you are, Joan Crawford or somebody, throwing people out of other people’s houses?”) While her friends swear off drinking, even at this point Geri admits that it seems to affect her differently than other people:

I felt GREAT! For the first time in my life I felt in tune with myself. I was all one and the one I was was Beautiful, Graceful, Witty, Brilliant, Sexy, Talented and just plain Terrific.

Dave has a sixth sense for picking out the “juicers” attending Walt Whitman High (as well as finding bars that serve underage customers) and pretty soon Geri has a social life and it revolves around drinking.

In 1976, the legal drinking age was 18, and that helps to blur the line between social drinking and problem drinking: Ginger and her BFF regularly have a few glasses of sherry in the afternoon, both of Geri’s parents have a martini or three before dinner and when they inevitably discover their daughter has been drinking, their solution is to have her join in the cocktail hour, reasoning that they would rather have her drinking out in the open and at home.

On the flip side, Geri is shocked to learn that the town’s most flamboyant barfly, Amorette (nicknamed Bunny), is Dave’s mother and his home life has become hellish due to her benders, during which she’ll disappear for weeks at a time. In a rare moment of candor, Dave reveals that he’s only going to drink as a young man- he’s going to quit cold turkey on his 18th birthday.

Remember I said harrowing? Scoppetone is relentless: Geri is responsible for the death of the family cat. Bunny is drug off to a psychiatric hospital in a straitjacket (and then is back on the sauce less than a week after her release). Geri has a physical altercation with her shop teacher. Geri gains so much weight that the only thing she can wear is a poncho. Eventually Bunny comes home from another bender and chokes to death on her own vomit on the living room floor.

And none of this comes off for a second as preachy or sensationalistic, mainly because the parents and other adults are just as bad at dealing with things as the teenagers. Geri’s English teacher, Miss Laine, confesses that she is a dry drunk and offers to take Geri with her to an AA meeting, but Geri can’t relate to the middle-aged alcoholics at the meeting, and her father sneers at the “God stuff” and declares that alcoholics are just weaklings. In the midst of all of this, Ginger takes to her bed, and eventually stops speaking entirely- finally realizing that his wife is having a major depressive episode he calls in a doctor and Ginger is shipped off to a private psychiatric hospital.

This is the incident that finally sends Geri over the edge, as she gets drunk and steals her mother’s car and gets as far as the New York State Thruway, and eventually blacks out and is raped and beaten up by a random wino. Are we finally going to get a redemption arc????

Well, sort of. Geri goes back to AA, but she still hates it. She loses her drinking buddies as well as Dave and Carolyn and BJ aren’t all that eager to renew their friendship. She relapses. She goes to visit her mother in the hospital and they clear the air about Ginger having lied about having been Popularity Queen of the 1950s to everyone, including her husband, but it is clear that mother and daughter have a long road ahead in repairing their relationship.

Told from the perspective of a year later, Geri is optimistic about attending college, but misses her friends, and isn’t over Dave, and is realistic about the fragility of her new sobriety:

But at least I can try. After all, trying is what it’s all about, isn’t it? What do you say to that? I say, yes!

Sign It Was Written In 1976 Department: “This was the first year they were letting girls into shop and I wanted to be a pioneer.”

Most 70s School Dance Theme Ever Department: “There were two big signs over the basketball nets saying ‘Colour My World,’ the theme of the dance. The band, called Lords of the Rings after the Tolkein book, was blasting away.”

15 Responses to The Late Great Me By Sandra Scoppettone