I’ve talked before about the how difficult it must have been to get the tone right when writing for teen mags. Act too much like the actual adult you are and you sound outright contemptuous about the-kids-these-days, what with their constant doing of the twist; too far in the other direction and you’re the the old person at the party, trying too hard to be cool (“No, 1991 Jane Pratt! I do not want to do drugs with you!”)

Personally, I think 16 got it right most of the time, enthusiastically, unironically embracing whatever teen girls were into. This is entirely due to the 20 year reign of the magazine’s editor-in-chief, Gloria Stavers, who presided over a golden age of teen fandom.

While 16 hyped its fair share of bubblegum acts and teen idols that never really caught on outside of the pages of the teen magazine world, Stavers also regularly catered to teens who had more offbeat tastes, and preferred their HUGE FULL COLOR PIN UPS to feature the likes of Leonard Nimoy, Jonathan (Barnabas Collins) Frid or Iggy Pop. Stavers also personally penned an obituary for Lenny Bruce for the magazine.

Let’s go to the headlines:

Is there any remaining doubt that Ringo was the worst Beatle?

This is typical of 16′s overwrought headlines: the story (by Stavers) is about how Cher went to visit a California safari park during the filming of Good Times and was not eaten by a tiger. But! On that very day 3000 miles away in New York an auto show model WAS TOTALLY eaten by a lion. Coincidence? I think not!

Start flipping through a stack of the era’s teen mags and it is likely that one question will come to mind: who the hell is DD&B?

That would be be Dino, Desi and Billy, a “super”group composed of Dean Martin’s son, Desi Arnez’s son and, uh… their friend Billy. 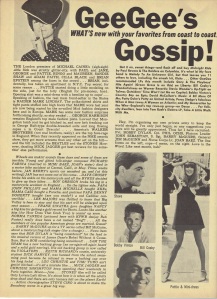 How do we know it’s 1966? You can set your watch by this list of Beatles’ wives-and-girlfriends:

Was the pun really necessary? TOO SOON GUYS!

I don’t even know if this is supposed to be subversive or what:

Speaking of Bob Dylan, do you know what never goes out of style? Teenage fan art! I am pretty sure this exact glorious piece of pointillism was featured in my 10th grade art show:

Although there was no sign of lazy-eye Robert Vaughn at Brockport High School in the mid-1990s (I’m guessing our equivalent was lazy-eye Dan Cortese): 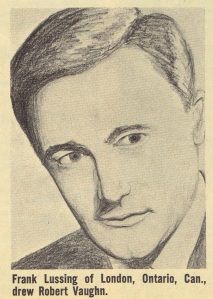 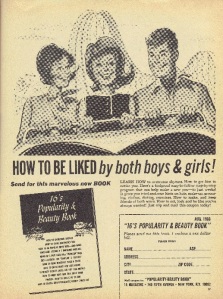 Who knew 16 was so progressive on the dating front?

Don’t worry, if you miss the Beatles this time, you can catch their next tour…

This entry was posted in Magazines and tagged 16 Magazine, 1966, Magazines. Bookmark the permalink.