“So this is California!” Donna thought. Pools, studios, celebrities, blue skies! And, for a girl on her first trip west, more excitement, more fun than seemed possible. 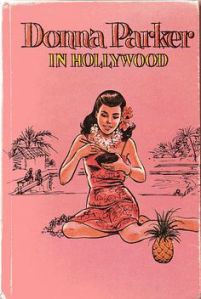 In our second installment of our 2016 Salute To Whitman Hardcovers, we again pick up with the extremely pleasant Donna Parker series.

Background: When last we left 14 year old Donna and her BFF Ricky West they had over the course of a 6-month period restored the faith in humanity of a disposed French count (and earned an electric sewing machine for doing so!); won a scholastic journalism award and thwarted a group of communist spies; and kept house while Donna’s parents set off on a whirlwind tour of Europe and India and dealt with some pretty heavy issues including dead parents, poverty in the suburbs and snobbery in the other suburbs. More strictly serialized than most contemporary girls’ series, Donna is at last ready to take her long-promised trip to California to visit her formerly long-lost uncle Roger and his wife, Summerfield Junior High’s former Journalism teacher.

The Plot:  The Parker family, Joyce Davenport, and Popular Square Dancing RichardPaul are all absent from this adventure, as Donna finally heads for the west coast for a long-promised visit with her Uncle Roger and Aunt Adele. Ricky West (“called Fredericka only by her mother”) (who you may remember is now tragically dead) makes a cameo appearance on the ride to the airport, having to turn down an invitation to accompany Donna:

Since Ricky’s mother had died, only a few months ago, Mr. West had been a lonely, uncertain person, a ship without an anchor.

Donna is super-excited about her first airplane trip (of course), as well as the prospect of meeting movie stars, as her uncle works as a sound engineer for a major Hollywood studio. She promises to get autographs for Ricky including those of Myra Brown (e.g., fake-Elizabeth Taylor: “if you see her, be sure to find out if her eyes are blue or purple!”)  and multiple-Oscar winner Adrienne Hope (fake-Katharine Hepburn?)

Donna’s parents also entrust her with delivering a present to her Aunt and Uncle: a miniature bronze statue of Ganesha that they picked up on their recent trip to India:

“That really is valuable, although I only paid forty rupees for it. I think it dates back to about the seventh century.”

Strangely, Donna is also excited about visiting with Ellie Townsend, the snobby ballet school girl who called her out for “chasing” the college-aged usher at her cousin’s wedding in the last book.

Seated next to Donna on the plane is Bruce Maslin, a talky high school boy on his way back to Beverly Hills from his fancy military boarding school. Donna, as usual, is prone to masculine flattery, and when the plane has to turn back to Chicago for an emergency repair, she throws judgement to the wind and accepts Bruce’s offer of a whirlwind tour of the city, including Marshall Fields, the Lincoln Park Zoo, the Swedish section and Bruce’s old neighborhood.

Who would have known… that in the evening she would be in Chicago with a boy who was exciting to be with, who was friendly and went to military school and seemed to know all about practically everything, and that he would be inviting her to dinner? Wait’ll she wrote home to Ricky!”

Unfortunately, when they arrive back at the (complimentary) hotel the airline had parked them at, they learn that the repairs have been made and the rest of the passengers have been shuttled back to Midway Field. They’ve missed their plane! Donna is in a panic, but Bruce laughs it off, calling a cab and telling the driver that there will be a big tip for him if he can get them to the airport before take-off.  When they arrive the plane has to return to the gate for them, and Donna starts to wonder if Bruce’s laid-back attitude toward life is all it’s cracked up to be.

The East-meets-West culture clash begins the moment Donna arrives at the airport, and Donna notes that even her Aunt and Uncle are dressed in shorts and sandals:

“If you mean I don’t look like a schoolteacher, Donna,” Mrs. Norcross smiled, “well I guess I don’t feel much like one either. But you know, I did go back to teaching this year- taking care of that little apartment we had didn’t give me nearly enough to do.”

The drive from LAX to the Hollywood Hills does give us a nice peek at mid-century southern California in a time when cross-country travel was far less common:

They had assured her that the wells were actually pumping, but had not been able to answer half her other questions. They didn’t know the names of all of the different palm trees, or why there were big billboard advertisements for cemeteries, or why there were so many places that gave Spanish dancing and voice culture and Hawaiian guitar lessons.

Donna has two disappointments upon her arrival: the first is that there has been no word from Ellie about visiting, and the second is that the Genesha statue she had been entrusted with has gone missing!

Donna decides to keep the latter to herself in the hopes that it will turn up somewhere.

Donna also is disappointed when she meets Linda Atkinson, a girl her own age that Aunt Adele has arranged for her to visit with. When status-obsessed Linda learns that Donna is only from the suburbs of New York City, she seems to lose interest in being friends. She is also dismissive of Mike, her nerdy Gentleman Caller. Although to be fair, Mike is kind of a chump:

“Mike lives over in the valley.” Linda said by way of explanation “ and he works in his father’s store on Hollywood Boulevard, so he thinks this place is some sort of roadside stand or something where you can just drop in whenever you feel like it.”

The boy looked hurt. “Gee, Linda, if it bothers you, I won’t do it any more. I thought that maybe you wanted me to take you someplace, because my father said I could have the car for a little while.”

Mike, a boy with very nice manners that impress her aunt and uncle, invites Donna on a trip to the Los Angeles Farmer’s Market, and also around to the various airline offices and lost-and-founds in search of the missing Ganesha. Never one to turn down male attention, Donna finds the market SO EXCITING, but Mike rather dull, what with being full of sensible advice about telling her aunt and uncle about the missing statue.

Donna also meets the girl next door, Jennifer Bruestle (say “Bristol”), who is studiously training to be an artist. But Jennifer’s family is SO MYSTERIOUS, with an absent father, an unseen mother who seems to be suffering from a mysterious affliction and a bratty little brother who gets sent away to a dude ranch in Arizona for some unnamed infraction. Jennifer also has a rabid hatred of anything that has to do with the film industry. Mysterious!

As usual a number of minor crises come up and are resolved over the course of a single chapter: Donna accidentally spills gravy all over someone’s sarong at Linda’s Luau, causing a scene; Donna’s mother writes Aunt Adele, mentioning the Ganesha is passing, which makes Aunt Adele very embarrassed and causes Donna to throw a tantrum; there is a scenic drive up the California coastline to San Francisco to meet Ellie, followed by a whirlwind tour of the city.

As in the previous volume, Donna is not an entirely likable heroine: she is still often self-centered, a little snobby, and dismissive of people who she finds too shy or studious or just “different”.

She does get a lot to think about when two of her friends are faced with grown-up decisions regarding their futures. She learns that Ellie has auditioned for a professional position with a ballet company, which she has worked her entire life for, and has been rejected, told that she might teach children’s lessons someday, but will never be good enough to be a principal dancer for a company.

Meanwhile, Uncle Roger has arranged for an art critic friend to see some of Jennifer’s paintings; when he writes back with some harsh criticism, Jennifer is actually delighted that someone has taken the time to take her seriously, and focuses on the suggestions for instructors and improvement.

And finally, Donna learns that she and Bruce had mixed up their identical raincoats in Chicago, and he’s had the Ganesha statue the whole time!

“All’s well that ends well,” Bruce commented brightly. “Have a nice trip home, Donna. And thanks for letting me have my coat back, button and all!”

“I never even told him that the button had come off his coat, too.” Donna thought after he left. “But imagine his not letting me know about the coat the minute he found out! I never met anyone so lazy!”

And finally, Donna “solves” the mystery of Jennifer’s mother, as she learns that she is Adrienne Hope, AKA Fake Katharine Hepburn, who has been suffering from a broken nose and an allergic reaction to adhesive tape the whole summer. Appreciative of Donna’s friendship with Jennifer, she gives her some candid snapshots, autographed for Ricky. Sensible Mike accompanies Donna to the airport, where he buys her a sensible newspaper to read on the plane. Sensible!

“It was awfully nice of your folks to ask me to go to New York with you. You know I simply adore airports, and Idlewild is about the most exciting one.”

Art Department: This was the first book in the series to feature the new, simplified cover art; sadly, gone are the gorgeous full-color covers from here on.

Prediction Department: Linda and Bruce are about 5 years away from joining the Manson Family.

16 Responses to Donna Parker In Hollywood (#5) By Marcia Martin