It seems that nothing can spoil Jessica and Elizabeth’s holiday- until Mr. and Mrs. Wakefield announce the arrival of an unwelcome houseguest… 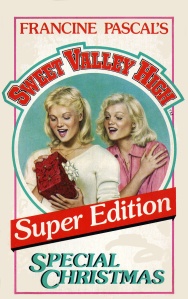 Background: Sweet Valley High remains one of the most enduring series of its era, leading to numerous spin-off dealing with the Twins at various ages (Sweet Valleys Junior High, Senior Year and University, to name just three), as well as specialized sub-series within the main Sweet Valley High series: your Super Thrillers, Super Stars, Secret Diaries, and this week’s selection, a Super Edition.

(A nice intro to SVH can be found here courtesy of The AV Club, but it really pretty easy. Elizabeth and Jessica are twins with matching sparkling aquamarine eyes the color of the Pacific Ocean and perfect size-six figures. Supposedly Elizabeth is the studious one and Jessica is the wild one, but it’s more like Elizabeth is a nagging scold and Jessica is a sociopath. They have about 200 friends, some of whom are “ethnic” and only appear in one book. Elizabeth has a boring but surprisingly volatile boyfriend named Todd, while Jessica has several hundred boyfriends over the course of the series, a worrisome number of whom meet untimely ends.)

The Plot: What’s so special about Special Christmas? Well, mainly that it features the return of the greatest villain the series ever produced, the glamorous New Yorker Suzanne Devlin.

Last seen in Sweet Valley High #11, Too Good To Be True, as the daughter of a wealthy diplomat who is an old college chum of paterfamilias Ned Wakefield, and who is the participant in a “daughter exchange” in which Suzanne visits Sweet Valley while Jessica cons Elizabeth out of the opportunity to visit New York. Upon her arrival, Suzanne lays waste, socially, to SVH by 1. Being nice to people to their face but mean to them behind their back 2. Stealing Elizabeth’s heirloom lavalier necklace and 3. Attempting to seduce Roger Collins, the young, hip English teacher who the reader is always reminded looks like Robert Redford (so… no, not that Roger Collins), and then when she is rebuffed, publicly accusing him of raping her. Somehow, her lies are shown up when class nerd Winston Egbert accidentally-on-purpose spills punch on her at the Big School Dance. Suzanne unrepentently leaves town and no lessons are learned nor morals dispensed. Also Jessica almost gets for-reals date raped by Suzanne’s snobby New York boyfriend, which reminds me that the farther I get away from my 11th birthday the less appropriate it seems for children to be reading these.

The Plot: Didja get all that?

Well, now it is Christmas in Sweet Valley, and Mr. Collins seems like he’s brushed off the shadow of suspicion:

Some of the girls insisted that he looked like a movie star, but that wasn’t a reason why he won the Best-Liked-Teacher award year after year. Mr. Collins was an excellent sport. He knew when to be stern and when to relax. And that day- with a big Christmas party in the gym ready to start any minute- he knew enough not to expect anyone to concentrate on The Crucible.

Uh… weren’t you just the subject of actual false allegations? Seems like he’d be personally invested in making them read non-stop Crucible.

We are next informed that “Secret Santa was an important part of Christmastime at Sweet Valley High” and treated to an extremely long and tedious description of how Secret Santa works.

We learn that Jessica and her frenemy Lila “Because I’m dope and do dope shit” Fowler are in fierce competition for Sweet Valley’s Miss Christmastime title (ugh) and also that Jessica is in love with an Austrian exchange student named Hans.

It is also important to note that, in the rich mythology of Sweet Valley High, this book takes place when  boring-but-volatile Todd, has moved to Vermont, but when they are still trying to make the relationship work and BEFORE Liz starts dating the (merely boring) Jeffrey French. Todd is due back for the holidays and Liz can’t wait for things to be exactly the way they were before he left. EXACTLY.

But a monkey wrench in thrown into the twins’ plans when their parents announce that Suzanne will be coming to stay with them for the entire vacation. And twins and their older brother, Steven, (who is supposed to be a college student but he spends all of his time hanging around with his sisters’ high school friends…) and furious and baffled by their parents’ wanting them to give Suzanne another chance:

The Wakefield siblings vow to drive Suzanne out of the house, working up a slate of pranks like short-sheeting her bed and pooping in her room (I mean, I assume that’s what Jessica means by “plant horrible things in all corners of her room”) (Which is actually Jessica’s room, so have fun pooping in your own room, I guess?)

Suzanne seems subdued when Mrs. Wakefield picks her up from the airport, and it is immediately hinted that all is not well, but Suzanne wants to keep whatever it is a secret and zzzzzzzzzzzzzzzzz….

Liz and Jessica aren’t buying it. After Suzanne apologizes for her boyfriend trying to date-rape her, Jessica immediately homes in on Suzanne’s potential weakness:

“It’s funny,” Jessica said, “but I don’t think she’s all that gorgeous, Liz. I mean, she’s pretty and everything, but she’s way too pale. And I think she’d look better if she weren’t quite so thin. Do you think she’s anorexic?”

“Maybe we should sneak butter into her food to make her gain weight. That would really torture her.”

LOL, Jessica, you are a garbage human.

But Liz has other things to be concerned about. Namely, Todd Problems, or I as like to call them, ToddProbbs. Has he been growing distant in the time that they have been apart? Will thing be EXACTLY THE SAME when he arrives for his visit???

Unbeknownst to Liz, part of Todd’s ToddProbbs is that he coincidentally ran into Suzanne at a ski resort in Vermont, and they, like, really connected. Can Todd admit that he is in love L-U-V, but not with Elizabeth???? TODDPROBBS!

In fact, when Todd finally arrives (looking “terrific in his tan chino pants and green sweater”, the Toddest outfit ever), Suzanne faints dead away at the first sight of him! Jessica puts two and two together after seeing that Suzanne has traveled with an entire case of pill and comes to the conclusion that…

“What we have on our hands here is a hysterical, devious drug addict. And the sooner we get her out of here the better.”

Jess also overhears Todd and Suzanne having a conversation about their time in Vermont, and jumps to the conclusion that they had an affair. As a public service, Jess enlists the aid of Winston and Aaron Dallas to help drive Suzanne out of town:

“How would you two like to be Suzanne’s Secret Santas?”

Winston’s eyes lit up. “But instead of doing nice things, we’ll do terrible things. Right?”

So Winston and Aaron embark on a very mild campaign of terror, mostly involving sending her anonymous notes that say “GO HOME” (I’d like to nominate these dudes for membership in the Against Taffy Sinclair Club). This eventually escalates into Aaron asking Suzanne on a lunch date, then asking her to meet him at the address of the local haunted-drug house (I assume that Tricia Martin and Regina Morrow are the main ghosts), where he will stand her up.

Suzanne has a glass of champagne (probably the most dated aspect of the book is the Wakefields buying booze for their underage children and their houseguest) on top of her new medication before setting out to meet Aaron for their fake-date, and immediately rolls over the twin’s Fiat while Sweet Valley’s finest just stand there watching.

“Jesus!” the police officer in the squad car said to the officer next him. They both watched in amazement at the red Fiat in front of them. Someone’s had a little too much pre-Christmas celebration already.”

In shock the two officers watched the little sports car skid dangerously to the right, straighten out again, and suddenly bump off the road, turning over on its side.

Suzanne is rushed to the hospital, where the Wakefields learn that she is NEAR DEATH and also finally reveal to their daughters that Suzanne has been diagnosed with MS.

“It’s possible she could be confined eventually to a wheelchair.”

“A wheelchair!” Elizabeth exclaimed. As hard as she tried, she couldn’t imagine pretty, vivacious, independent Suzanne trapped in a wheelchair.

But! In the very next chapter Suzanne’s condition has be upgraded from “near-death” to “minor cuts and bruises and a slight concussion”.

Also her doctor arrives from New York and tell her that she doesn’t have MS at all, she has Mono:

“Suzy,” Dr. Harrison burst out, “you don’t have multiple sclerosis at all! We’ve been racking our brains all day, and finally figured out what happened. You see, you had an undetected virus…”

HALLELUJAH IT IS A CHRISTMAS MIRACLE. ALSO: OOPS, MY BAD!

Liz and Todd gently break up, clearing the way for the Jeffrey French Years.

Again, it seems like zero lessons were learned by all.

Ten Years Later Department: But wait, there’s more! Sweet Valley Confidential, the mostly-disappointing “Ten Years Later” sequel does include Suzanne in its What Ever Happened To? Epilogue and totally retcons her fate!

Suzanne Devlin, who had stayed in Sweet Valley for a nightmare month as a guest of the Wakefields, is also dead. Years ago she caused a terrible scandal involving a sexual molestation charge that almost cost Roger Collins his career. In the nick of time, Elizabeth revealed Suzanne’s mendacity and saved the school’s favorite teacher.

Suzanne was forced to leave Sweet Valley but returned six years later a changed person; unfortunately, she was ill with multiple sclerosis. She apologized to everyone, then crashed her specially equipped car after taking medication with champagne.