The story of two innocent girls in a race not to stay that way! 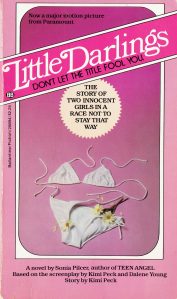 A one-sentence description of the plot (adapted from the screenplay of the notorious 1980 film) belies the sensitivity with which the subject is treated: two girls engage in a contest to see who can lose their virginity first.

The busload of girls is under the supervision of coach Gary, who seems completely overwhelmed by his charges, especially when a discussion of Andy Gibb’s cute ass is immediately followed by a fistfight between Angel and Ferris, who dislike one another upon first sight (even if Ferris is secretly delighted that the fight scuffed up her white silk suit, helping her blend in with the regular kids).

In the ladies’ room at the highway rest stop, the girls ignore Gary’s pleas to get back on the bus as the topic turns to sex, and who has and has not DONE IT. Cinder, a born instigator, figures Angel and Ferris for “Two little virgins, how quaint.” When Angel protests that “boys are a pain in the ass” she changes tack and dismisses them as “lezes”, and the other campers scramble to assure the group that they are definitely WOMEN, not girls.

Cinder won’t let the subject drop, and after checking in at Cabin A, harasses Ferris and Angel into making a bet: her latest residual check from Tidy Curl Creme Rinse to the first one who loses her virginity.

By the next day the whole camp is in on the scheme, with the other campers putting their money on either Angel or Ferris. But a more pressing concern is finding an available male at an all-girls camp. Ferris tentatively announces that her “target” is 20-something Gary,  while Angel doesn’t see any prospects until she runs into a camper from the boys’ camp across the lake, when they both are AWOL at a local gas station.

Once the terms of the bet are settled, the girls’ thoughts next turn to the subject of PROTECTION, because boys are useless on the subject: “They don’t do shit since the Pill.”

Sneaking away from Sunday morning chapel services, Cabin A steals the camp bus, courtesy of Angel’s talents at hotwiring cars and drive it into the local gas station, where they plan on raiding the condom machine in the men’s room. In one of the funniest scenes committed to paper, they find it locked up, and (unable to ask for the key to MEN’S ROOM, duh) hoist Penelope through the window. When the machine eats all her change without giving up the goods, Penelope pries the entire thing off the wall. When the bus runs out of gas on the way back to camp, the girls have to take turns carrying the vending machine all the way back.

Rolling up in a boosted car while all of this is going on is Randy from Camp Tomahawk, a likeable dum-dum who immediately takes notice of Angel, as well as approving of their criminal enterprise: “Where’s the party? Right on, ladies!”

Over breakfast the next morning, Angel announces to her supporters that Randy is THE ONE, while everyone erupts into giggles when one of the morning announcements is that the proprietor of a local gas station is offering a reward for the return of his stolen “prophylactic machine”.  Cabin A also goes all-in on starting a food fight, which gets them an audience with the camp director, right under her framed photograph of Eleanor Roosevelt. Miss Nickels tries to pin the blame on Angel for being a bad influence, but Ferris comes to her defense. Perhaps sensing a thawing in their rivalry, Cinder starts pushing Ferris to make her move on Gary, whom Ferris has worked up into convincing herself that she’s in love with. Cinder lends a hand by pushing Ferris into the pool so that Gary can “rescue” her and give her private swimming lessons.

But everything goes all to hell on parents’ day, when Angel tries to get advice from her own single mother, who dismisses sex as no big deal; meanwhile Ferris’s mom is a no-show, and her father announces that they’re getting divorced. In lighter-hearted antics, Chubby’s mother finds fifty of the purloined condoms in her daughter’s bureau, Dana’s parents discover her stash of sexy books, and Sunshine’s father arrives in a full-length poncho.

Much to Cinder’s consternation, Ferris is left bereft by the news, refusing to even get out of bed. Angel isn’t making much headway with Randy either: when she paddles across the lake with a smuggled 6-pack of Budweiser to seduce him, he gets drunk and passes out.

Her next attempt goes even wrong-er, as she realizes that she’s starting to have feelings for that hunky doofus, and those feelings are confusing. Randy is confused too, and the two quarrel, and he insists upon being taken back to camp, pouting all the way.

Luckily, this puts Angel in the middle of the lake, and is there to rescue Ferris, who has stolen a rowboat that she doesn’t know how to operate in a melodramatic gesture after her father’s announcement. After the rescue, Ferris confesses her troubles to Angel, who in turn admits that her mother “splits” a couple of times a year, whenever she breaks up with her boyfriend du jour.

Fury rushed out of her at Ferris. She did not know why but she cried. “You’ve had your mother for fourteen years. That’s forever. And you’re making such a big deal about it. Look around. Half the kids at camp have two fathers and one mother or one mother and no father- or nobody at all!”

“Angel,” she said, looking at her. “Thank you for saving my life.”

“I didn’t know it was you,” Angel declared. “Believe me, if I did and had known what a pain you’d turn out to be, I’d have let you drown.”

Ferris smiled slightly. “No, you wouldn’t.”

The next night, Cinder still on her case, Ferris announces that tonight’s the night with Gary. Turning up at his cabin in Cinder’s negligee, to “talk”, Gary is by turn baffled and flattered, but keeps Ferris at arm’s length. In desperation she tries to convince him that she has a terminal illness:

“The doctor said I only have” – she turned to him, her face tragic – “very little time left. Six weeks more of sweet life…”

Gary gently steers her out of his cabin, assuring her that if she was 21, he would probably fall madly in love with her. Having at last received the older-male validation she was seeking, Ferris plants a chaste kiss on him and runs back to cabin A, “glowing”, where the other girls preemptively declare her the winner, and Ferris lets them think what they want.

Meanwhile, Angel has again snuck off with Randy, who is apologetic over their last encounter, and admits that she’s the only girl he’s brought to the boathouse all summer:

“I come out here to think, you know,” he said, laughing a little. “I don’t look like anything’s in my head, huh? But I have a lot going on in there.”

Angel and Randy’s encounter is of the fade-to-black variety, although afterward Randy is worried that he’d done something wrong:

His expression revealed how crushed Randy felt. He had thought it was nice, that he had pleased her. “Oh,” he said flatly, feeling inadequate.

“It was so personal,” Angel said.

When Angel admits that it was her first time, Randy is immediately concerned, eventually tentatively offering a declaration of his feelings.

When she arrives back at Cabin A, she’s rushed by the rest of the girls, demanding details. Feeling protective of Randy (and still unsure of her own feelings) she tells them that nothing happened. Gloating, Cinder declares Ferris the winner.

But there are still consequences. When Randy turns up looking for Angel the next day, Cinder sneers at him for being so gullible:

Meanwhile, rumors have been circulating throughout the camp that a staff member has been having “an affair” with a camper, leading to Gary being fired; things aren’t helped by the fact that a surprise inspection turns up hundreds of condoms in Cabin A.

At which point Cabin A turns on Cinder, declaring that they’re going to explain everything to the camp director and clear Gary’s name. When she taunts all of them for acting like a bunch of bourgeois virgins (LOL), they pull an “I am Spartacus” on her, declaring that they are all virgins, actually, and formerly-pacifist Sunshine punches her in the face.

After (very) briefly flirting with Cinder to try and make Angel jealous, Randy instead decides to talk things out with her, and she learns a valuable lesson about boys having feelings too. He tries to convince her to have a real relationship, even after camp ends, but Angel tells him long distance won’t work, leaving him heartbroken.

And we wind up where we started, back  on the bus home (continuity alert: we never learn how the bus got back to camp after the girls abandoned it). Penelope inherited Dana’s sexy library; Cinder is sporting an enormous shiner; Ferris and Angel are pretending to be too tough for goodbyes.

Parents and daughters are reunited, and Cinder resumes making out with her boyfriend- although she’s looking over her shoulder at the other girls the whole time, a little envious of their friendships. So maybe even she will turn over a new leaf.

Angel has a last-minute reconsideration of her no-goodbyes policy and introduces her mother to Ferris as :

“What the hell- my friend Ferris Whitney.” She stopped herself, then added, “My best friend…”

In a very sweet ending, Ferris and Angel gleefully shout insults at each other out of their car windows, until their parents turn in opposite directions off the highway, with a final shout that they’ll call each other first thing in the morning.

Just in case you needed a reminder of what relationship we’re really supposed to be invested in.

Notes On Film Department:  The movie follows the book’s plot pretty closely, although it is more condensed to fit a 90-minute running time. Unfortunately, a lot of good characterization is lost, especially poor Chubby (“I don’t want to be skinny! Why won’t anyone believe me? I want to be voluptuous and ripe like a melon!”); while in the book she turns out to be the camp’s best athlete, in the movie she’s pretty much reduced to “wacky hats”.

But the movie does benefit from spot-on perfect casting, with a tour de force performance from Kristy McNichol as Angel; Tatum O’Neal, 7 years off her Oscar win, as Ferris; Matt Dillion in the Matt Dillionest of Matt Dillon roles as Randy; 13 year old Cynthia Nixon as Sunshine; and an 11 year old wonder named Jenn Thompson, stealing every scene as Penelope.

The extra scenes were apparently filmed, which were used for a network TV edit. The VHS release was also substantially altered, with most of the pop songs gone from the soundtrack.

A home video version remains stubbornly elusive in 2019- it turns up occasionally on streaming services (Vudu and Amazon have it this summer- grab it while you can!)

And finally, there is a long-standing rumor that Little Darlings was the final film to be rated C for Condemned by the Catholic Legion of Decency. That doesn’t quite jive with the official “C” rating being retired in 1978. In 1980, it’s more likely that it got an updated O for Offensive.