Wrapping Up The Imaginary Summer Book Club: Whatever Happened To Baby Jane? By Henry Farrell

(Click here for information on the 2019 edition of Molly’s Imaginary Summer Book Club Featuring Classics of Women’s Literature.  For the titles that have filmed adaptations, we will also be looking at the movies as we go along. This week, the September Selection, Henry Farrell’s Whatever Happened to Baby Jane?)

As usual, my best intentions to schedule a suspense/thriller/horror title for Halloween lands around Thanksgiving. Which I guess can still be appropriate, as you gather with your family, you can spend some time with the Hudson sisters!

Another case of the film version completely eclipsing its source material, Whatever Happened to Baby Jane? is best known through the 1962 film directed by Robert Aldrich starring Joan Crawford and Bette Davis and (more recently) the much-lauded, somewhat controversial, 2017 TV miniseries Feud, which centers on the making of the film, starring Susan Sarandon (as Davis) and Jessica Lange (as Crawford).

Aldrich’s film is mostly-faithful to Farrell’s novel, so the serviceable prose won’t hold any surprises if you’ve already seen the film.

Opening with a prologue set in 1908, when “Baby” Jane Hudson is the biggest star in the vaudeville galaxy, having made a fortune for her family. She is also a holy terror, and fans around the stage door trade gossip (that she’s actually a midget, that her parents give her whiskey to stunt her growth, that she is possessed by the spirit of a deceased actress) while they wait for the object of their affection make a appearance and sign autographs. Her overbearing stage-father has exploited his daughter’s image to it’s fullest potential, and Jane has become all-on marketing phenomenon.

When she finally makes an appearance, it is in the midst of a full-on tantrum, and one disillusioned fan notes:

“What’s ever to become of a child like that? Mercy! Can you guess?”

“It’s the others I pity. The ones who’ll have to live with her. Just think what life’s going to be for them!”

Fifty years later, the prophecy is fulfilled, as a pair of middle-aged housewives gather one afternoon to watch a movie starring their girlhood idol, Blanche Hudson, and gossip about the glamorous superstar of the 1930s, who was paralyzed in a mysterious accident at the height of her fame, and now resides in a sprawling mansion in the now-rundown neighborhood, a complete recluse.

California-chic Mrs. Palmer points out the actress playing Blanche’s gum-cracking girlfriend in the movie is Jane Hudson, Blanche’s sister, who appeared in character roles in most of her sister’s movies. Frumpy midwestern transplant Mrs. Bates is shocked to learn this, and inquires if there is any truth to the rumor that Jane was responsible for the accident that crippled her sister…

Meanwhile, next door, Blanche is also watching herself on the small screen, all the while keeping an ear out for Jane, who has become quite unstable since she has started drinking again. When Mrs. Stitt, the Hudsons’ housekeeper and one of Blanche’s last links to the outside world finds a stack of Blanche’s fan mail in the trash, unread, she urges Blanche to place Jane under a doctor’s care (unspoken: because she is CRAAAAAAZEEEEEE).

But Jane has other ideas, starting with restarting her career, whether her bed-ridden sister likes it or not. Engaging the only respondent to the ad she placed in trades who didn’t ask a lot of pesky questions about union jurisdiction (“Exp. Accompanist-arranger, male, to join est. star in act for clubs, TV. Piano, violin, req.”). Edwin Flagg, a failed child prodigy himself, now a dumpy middle-aged man desperate to get away from his overbearing mother, sees Jane as his meal ticket, crazy or not.

Jane and Blanche’s relationship vacillates between torture and neglect, as Blanche desperately tries to reach anyone in the outside world, and Jane resorts to murder to keep the mistreatment of her sister a secret.

While the various shocks that serve as set pieces in the film are less shocking when you know they’re coming, Farrell does manage to create some sympathy for Jane: the loss of their doting parents to the 1918 flu pandemic derails her career, and coincides with Blanche’s ascendency in Hollywood (and her own relegation to second-banana status); her guilt over Blanche’s “accident”, the ravages of alcoholism, and the realization of her greatest fear:

More paranoid than ever when she realizes that she has killed the housekeeper during one of her “spells” she tries to run over Edwin with the car, and manages to escape the scene of the accident, and in the chaos that follows, steal the dying Blanche away to the beach, where Blanche confesses the truth: she caused the accident that ended her career, attempting to kill a drunken Jane out of years of resentment for being the favored child before their parents’ death.

The final scene of the book plays a little differently then Aldrich’s version, as Jane manages to call the police to attempt to get help for her sister before she totally cracks up, performing her old vaudeville routines for the gathering “audience” as the LAPD desperately searches the packed beach, in an attempt to find Blanche.

While Robert Aldrich was a true original in Hollywood, directing a handful of my favorite movies (including the 1956 Joan Crawford psychodrama Autumn Leaves), I actually am not a huge fan of his version of Baby Jane, which is long (2 hours, 13 minutes) and somewhat sluggish in my opinion. Controversial choice: I actually prefer the 1991 made-for-TV remake, which comes in at brisk 93 minutes.

While it has the cheapo look of most made-for-TV fare of the era, it features the excellent stunt casting of Vanessa (as Blanche) and Lynn (as Jane) Redgrave, who seem to be having a blast camping it up in their only film together.

Updated for the 1990s, Jane was now a famed child actor in the 1940s (sort of a demented Judy Garland) while Blanche became a Hollywood superstar in the 1960s. When the sisters learn that Blanche’s movies have been released on VHS, Jane heads over to the local video store to find out if they carry any Baby Jane movies.

Played by John Glover, a specialist in playing yuppie scum and other assorted dirtbags, his performance is the strongest part of the movie, as he convinces Jane that for the low, low fee of $1000 he can place her in a cabaret showcase. The fact that Jane can no longer sing barely fazes him, and they work up an act where she will lip synch to a treacly duet that she recorded with Blanche in the 60s. But who will perform Blanche’s part?

Billy tells her not to worry about it, and although Jane has clearly been becoming more unspooled as the week progresses (including killing Blanche’s physical therapist), she manages to get to the club and start her performance…. and out steps Billy in full drag as Blanche. 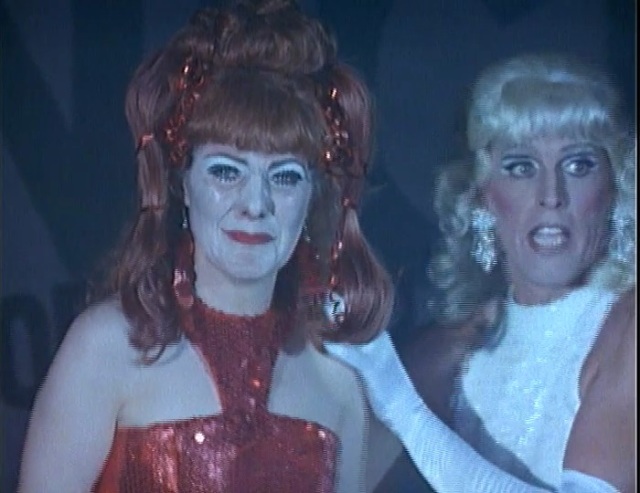 While all of this is in questionable taste, I love every minute of it.

Jane flees back to the house, unaware that Billy (still in evening gown and full make-up) has followed her to get the rest of the money she owes him, and startled by his sudden appearance, stabs him to death with her Sword of Excellence Award for Best Child Actor of 1949.

Availability: The book remains in print, the current paperback edition by Grand Central Publishing includes three of Farrell’s short stories, including “Whatever Happened to Cousin Charlotte?” which was the basis for Hush… Hush, Sweet Charlotte.

The 1962 film is available on home video and through various streaming platforms.

The 1991 remake can be difficult to track down, although it is currently streaming through Amazon Prime. Daily Grindhouse has a nice appreciation of this version.

2 Responses to Wrapping Up The Imaginary Summer Book Club: Whatever Happened To Baby Jane? By Henry Farrell