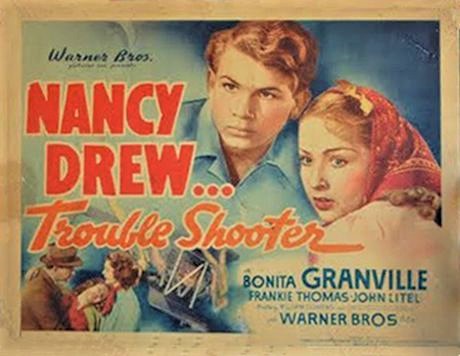 Continuing this week with the third of four Nancy Drew movies produced by Warner Brothers in 1938-39, and I suspect we are getting farther and farther afield of the source material, and the emphasis continues to be on the wacky comedy over the mystery elements.

I have read that the first two films in the series were so successful that this one was given a larger budget, and in some ways it shows- it opens with an elaborate tracking shot up to the city jail, as various extras discuss the presumptive guilt of Matt Brandon in the disappearance of the neighbor he’s been feuding with. Brandon is all like “Get me Carson Drew!!!”

Back in River Heights, Drew is in the midst of an elaborate hoax to get Nancy to join him on a camping trip, becoming increasingly more screwball until he ends up firing his shotgun into the ceiling. Nancy gets him to cough up the truth: “Uncle” Matt needs his help. But no detecting, young lady! Again, Nancy seems to be operating on a different level, waving off both her father and the local police. She’s the only one who can clear Uncle Matt’s name, obvs.

And they’re off to Silver Lake. At least they keep saying Silver Lake, but several signs throughout the town say Sylvan Lake. Similarly, Carson Drew announces that Ted (Ned) Nickerson is vacationing there with his family, but refers to him as “Ted Nicholson”. So the budget went towards fancy camera set-ups, not retakes on flubbed lines.

UGGHHH, WARNER BROTHERS! Well, that certainly remains true to the casual racism of the original series (and many series of its era). Apollo is played by Willie Best, one of dozens of black character actors who toiled away in supporting roles as comic shoeshines, Pullman Porters and janitors throughout the Classic Hollywood era. Best is credited in over 130 film and TV roles over a 25 year period, and the audience familiarity with him by 1939 raises his status in this B-movie to that of a guest star. Especially since Apollo does more to move the plot forward than any other character in the movie, including Nancy.

Starting off when Nancy spots a rare flower growing in Uncle Matt’s back field, and sends Apollo to dig it up for her to bring back to River Heights. When he does so, he finds the buried corpse of the missing neighbor, triggering the arrest of Uncle Matt. Nancy ropes an extremely apprehensive Ned-Ted (he just wants to build a boat on his vacation!) into poking around the local greenhouse in search of the plant, reasoning that the seeds were carried to Uncle Matt’s field when the real murderer buried the body.

(Aside: this plot point was cribbed by In the Heat of the Night about 30 years later.)

And it is a good thing that Apollo is around to do the heavy lifting, plot-wise, because Nancy is presently very distracted by the attention her father is paying to the pleasant Widow Gregory, whom she accuses of being a “steamy siren” who is trying to seduce her father.

Nancy gets it together long enough to drag Ned-Ted over to Apollo’s in the middle of the night to go “ghost hunting” (it does speak to Best’s comparative stature in Hollywood that Apollo at least gets to constantly complain about being annoyed by these crazy white folks), which ultimately only leads to some impressive physical comedy, as Frankie Thomas’s Ned-Ted ably matches Best pratfall-for-pratfall.

WB puts more money on screen with a spectacular fire at the greenhouse, which destroys the sales receipts that Nancy thinks will implicate the true murderer. Almost inconsolable after seeing her father and Widow Gregory canoodling on a glider at the town’s ice cream social, Nancy and Ned-Ted are lured onto an airplane piloted by the murderer’s accomplice, who parachutes out, leaving hapless Nancy and Ned-Ted onboard to die in a crash… ah, the perfect crime! (???)

Again, WB gets spendy with an extended aerial scene that managed to make me motion-sick even on the small screen. Meanwhile, it is again Apollo who comes to Nancy and Ned-Ted’s rescue by telling Carson Drew and Widow Gregory that they went to do some sleuthing and should have been back by now. Everyone (except Apollo, who is thanklessly not present for the finale) races to the scene as Ned-Ted manages to crash-land the plane and he and Nancy emerge unhurt, Nancy ready and willing to make amends with Widow Gregory. We learn that the murderers spontaneously confessed off-screen (!!!)

And finally, some days later, Ned-Ted has finally managed to finish building his sailboat, which he names after Nancy. After christening it with a bottle of champagne, they take it on the maiden voyage… and it immediately sinks.

Odds and Ends:
Bonita Granville noted that this was her favorite of the four films.