I Never Asked You To Understand Me By Barthe DeClements

Posted on December 9, 2021 by mondomolly

Stacy didn’t look like a reject, and I didn’t think I did either. We were just having too hard a time… 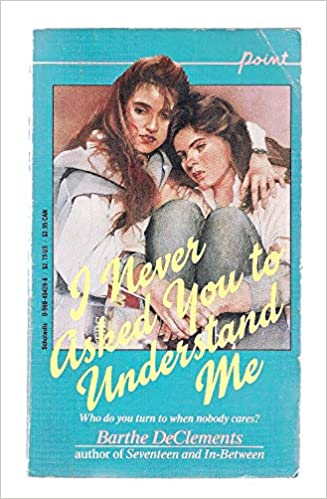 I have reviewed a number of Barthe DeClements’s books over the past few years, starting with the not-quite-Lost Classic Nothing’s Fair in Fifth Grade, which introduced Elsie Edwards, the new kid in town with a horrible home life and a “weight problem,” both of which are implied to be conquered by a starvation diet.

DeClements did better by Elsie in two YA follow-ups, How Do You Lose Those Ninth Grade Blues? And Seventeen and In-Between, told from Elsie’s point of view as a high school student whose weight lost has not solved all of her problems. DeClements (who turned 101 in October!) returned to the Juvenile category to pick up the stories of minor characters of “Bad Helen” Nichols and Marianne Rawlins as they coped with dyslexia and dead moms, supported by the charming class troublemaker Jack Hansen

I really thought I had uncovered the last book in DeClement’s Elsie Edwards universe with Fourth Grade Wizards, but I was mistaken!

The Plot: …And this is the darkest, saddest installment yet.

Narrated by 15-year-old Deidre “Didi” Neil, the book opens with her transfer from the regular public high school to Cooperation High, an alternative program for dropouts, burn outs, and other teenagers who have racked up too many absences or are otherwise struggling. As she is completing her intake process, Didi nods to a familiar face, a girl named Stacy Reynolds who Didi knows in passing because “the kids who party end up bumping into each other.”

While DeClements’s other heroines have had certainly had their share of problems, Didi and Stacy are the first main characters that would squarely be considered the Bad Kids in other books: they drink, smoke pot, skip school and Didi is interested in being sexually active with her new boyfriend.

As the new girls in class, Didi and Stacy are dubious about their prospects at Co-op High, and frank in their assessments of their teachers and non-traditional curriculum: social studies teacher Dave is “babysitter,” home-ec teacher Ellen is obviously a born-again Christian and an easy mark; principal Ruth seems really out of it, but Madge, the guidance counselor seems cool.

Veteran students Larry and TJ fill in the girls on the deal with lunch (it’s shipped up from the regular high school, but there is never enough, which is why the line gets pushy) and the fact that the faculty tends to turn a blind eye to certain student activities:

A bong. It was a bong being passed around. They didn’t even bother to move off into the woods like in a regular school.

During their orientation, Stacy and Didi are given “an attitude scale to see how alienated we are.” Didi scores high in Academic Drive, while Stacy pings for Alienation From Authority. This is just the first hint of what Stacy’s problems are and how she ended up at Co-op.

Didi, on the other hand quickly reveals her problems to the reader: her mother is dying of cancer, and after some insensitive comments from the High School faculty, she starts cutting class, and gets suspended; intercepting the suspension letter at home, she spends the time at the mall until word comes down that she’ll be suspended for an entire semester.

Didi’s father has hired an extremely nosy housekeeper named Monica to help out at home while Mrs. Neil is in the hospital (she immediately shows herself to be a phony and on the make, introducing herself to the family as “Monique”). Didi’s beloved great-grandmother also arrives for a lengthy stay and serve as the only emotional support Didi really has:

My dad and I hadn’t had a fifteen-minute conversation in my fifteen years.

Grandmother is both deeply into the New Age movement and self-determination, insisting that Didi has total control over her own fate. After her mother’s death Didi hears Grandmother and Rose (her paternal grandmother) discussing her parents relationship:

“What a wasted life Anne had. I can’t think of anything stupider than trying to make a career out of being Raymond’s wife. He was never a people person.”

In the meantime, Didi and Stacy have started partying together, and Didi is especially interested in gentle stoner TJ. Didi has been aware that Stacy had been dating a boy named Brian and had seen her hanging around with him and his friends, including Craddoc Shaw (!!!) but she hasn’t seen them together for a while. The girls become closer, and Stacy gently wheedles an invitation to stay over at Didi’s one weekend- when she returns the invitation, Didi finds out why she’s so eager to get out of the house when her drunk father beats up her mother. While that is A LOT, Didi understands (or think she does) that he is also beating Stacy on the nights her mother is out of the house at work and promises that she can spend every weekend at the Neils’.

But is there something else going on? Stacy confides in Didi that her father had taken a creepy interest in her love life and starts to describe an incident in which he chases her into her bedroom… but when the conversation is interrupted, Stacy backtracks. “Nothing. He’s just a shit.”

TJ takes Didi on a date to the Led Zeppelin laser show, and she learns that he lives on his own, having been squeezed out when his widowed father remarried. Working the night shift at Denny’s, he earns enough to pay the rent and buy weed. When Didi learns that he’ll be spending Thanksgiving alone she invites him to join her family, although pleads with him to come to dinner  “straight”.

When Monica finds out that she’ll be getting the day off and Didi and her grandmother will be doing the holiday cooking she weasels an invitation to dinner, and Didi notes:

Monica always goes limp and helpless around Dad, and he bites every time.

TJ shows up high, but is polite and charming, and thoughtfully discusses his experiences at Co-op High with Didi’s family. Didi gives him a photograph of herself, and he invites her and Stacy to attend his band practice.

Elsie and Craddoc also show up at the rehearsal, along with Jenny Sawyer and Jack Hansen, who as usual is beloved by every teenaged social strata. But Stacy seems really out of it, and old friends Jenny and Elsie note “Something’s really wrong with her.”

After the rehearsal there is some background drama about Larry owing his weed dealer money, and things get hot and heavy between Didi and TJ, although she is worried about birth control and she and Stacy decide to leave.

The girls have been spending so much time together that their families are starting notice. Monica implies Lesbian Panic, but Stacy’s father is much cruder about it:

“You girls got something going together?”

“Stacy has to run over to your house one week to sleep in your bed. You have to come over here the next week to get in her bed.”

Infuriated, Didi informs him that she can tell when she’s not welcome, and leaves. When she gets home, she is unpleasantly surprised to find Monica and her 9-year-old daughter, Cindy, moving themselves in. With her Grandmother having left for home and her father “talking more to Monica than he talked to me in fifteen years,” Didi turns to TJ for emotional support, but things get mixed up and when he suggests that he’s “got something” by way of birth control, she leaves and freezes him out when he repeatedly attempts to apologize. After she cools down and starts rehearsing what she’ll say to him to try and make up, TJ has an extended absence from school.

Worse, Monica has used her influence with Didi’s father to totally ban Stacy from the house. When Didi tries to explain the situation with Stacy’s homelife, they refuse to listen and Didi has to break the news to Stacy. The next weekend Monica is suspicious when she smells Stacy’s cologne in her car, and suspects that she has been sleeping in the Neils’ garage.

Didi’s Christmas is a disaster, as Monica continues to wedge herself into the family, nixing Didi’s glass of wine at dinner and throwing herself at Mr. Neil. Didi shows admirable self-control, as she realizes that her only presents are from her Grandmother (an overnight bag and nightgown) and Cindy (a dime store checkers set, which she accepts gracefully); her father forgot to get her a Christmas present.

He hastily shoves some cash at Didi and suggests dinner at the Space Needle, but when Monica and Cindy are also invited along she declines. Taking her Christmas money, she meets up with Stacy and heads out to a party with even less parental supervision. She buys some weed from Larry, who is getting ready to leave town after getting caught fencing a radio to pay back his dealer- it’s only a matter of time before his parole officer sends him back to lock-up. He offers to let the girls to come with him if they can come up with $100 for gas money and suggests that Didi lift her father’s wallet.

But Didi has a last-minute change of heart and phones her Grandmother in San Francisco instead: after some resistance, she agrees to let Didi come live with her.

Stacy also finally confides in Didi what is really going on at home: her father isn’t beating her, he’s raping her. Didi convinces Stacy to talk with Madge the guidance counselor, but she loses her nerve at the last minute. Eventually Didi gets Stacy to present the case of a theoretical “friend” to the school secretary, who advises her to tell her “friend” to put a lock on her bedroom door and jump out the window and call the police the next time her “friend’s” father tries anything. Which is depressingly terrible advice that seems even more depressingly true-to-life.

Didi and Stacy literally scrape together pennies to buy the lock, and also devise a system that before Stacy calls the police she’ll call Didi’s house and let the phone ring once (so she can still get her quarter back from the payphone to call the cops); sure enough the next Friday Didi gets the one-ring signal around midnight and rushes to Stacy’s house in time to see her father being drug away in handcuffs.

There isn’t really a happy ending here. It remains uncertain if Stacy’s mother will actually leave her father, and a well-meaning but frustrated aunt demands to know “How could you be so dumb to believe that?” when Mrs. Reynolds says that her husband threatened to leave them destitute.

Madge proves herself to not be so useless after all, the only adult to actually say the words “sexual abuse” in the whole book and tell Stacy that it’s not her body that “tantalized” her father and sees that she will at least get some therapy.

The book ends with Didi making peace with TJ and leaving to live with her grandmother.

DeClements has an unusual amount of compassion for her high school screw-ups, especially when it comes to the perpetually stoned TJ, who is also exceptionally mature for his age (he’s on his own at 16), responsible (he works double shifts when the cook at Denny’s calls out drunk) and sensitive (when Stacy dismisses idea that Brian or any boy would understand her ordeal, Didi suggests that TJ would). It is a book that really stands out in the sex-and-drugs moral panic of its era.

The teacher stated the rules. Like you couldn’t bring drugs to school. You couldn’t smoke cigarettes except in the designated area.