An island reunion of romance, surf and sun! 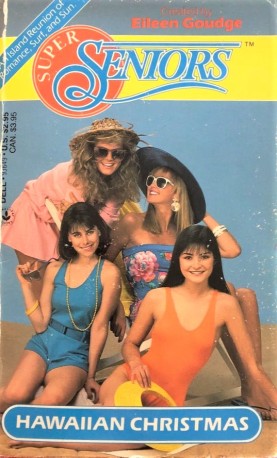 The cover is telling: this book is just as busy and confusing yet generic as the graphic design choices. I had to defer to the folks at Fantastic Fiction over how to even entitle this one. Is it SUPER SENIORS or a SENIORS SUPER? There is no number on the spine or for any of the (non-Super) Seniors titles (19 in total) listed inside.

Things don’t get any less confusing inside, starting with the fact that none of these characters are high school Seniors at all! They’re college Freshman at this point in the series. The four Main (Super?) Seniorses descriptions don’t match the cover models at all, so I have no idea who is supposed to be who, complicated even more by the fact that their personalities are so interchangeable that I constantly had to flip over the back cover to figure out which Super-Senior I was reading about.

And speaking of that back cover copy, it gives away a major plot twist!

First, Lori meets and falls for sophisticated Kevin Duvall who may just be a plant to keep her happy in her career.

We literally don’t find that out that he is until the final pages of the book, and Lori never lets on that she finds anything suspect about him- except that he’s a super-creep, which we shall get to.

Continuing the confusion, is that the (ghost-?)writer doesn’t give us any kind of summary about who these people are or what the point of the series has been, but keeps dropping in references to past events that are way more dramatic than anything going on in this actual story. Such as [checks back cover] Alex sounds like she has more tragically dead boyfriends than Jessica Wakefield.

It’s a disappointment, since I am genuinely a fan of Eileen Goudge’s Swept Away series (which takes the COMPUTERS, DUH! approach to time travel); here she is credited as the Francine Pascal-style “creator” of the series. Goudge, who has moved on to a thriving career in Women’s Literature (chick-lit), got her start ghostwriting for Sweet Valley High, so it seems like she would know how to bring the reader up to speed with a quick summary in the first chapter.

The Plot: Instead the reader is plunged directly into the life of Lori Woodhouse, who upon graduating from high school, has embarked on a career as a successful model living in New York. She shares a Greenwich Village apartment with high school friend Kit, who works as a waitress while studying ballet at Julliard.

Lori’s agent is eager for her to accept a contract with Cachet, a cosmetics company, but Lori is starting to wonder if modeling is all it’s cracked up to be. Do people just see her as a pretty face and a hot bod? It is mentioned that she got the opportunity to start her modeling career through an “older man” that she had an affair with that ended unhappily. That is all we are told, and it will never be mentioned again.

Lori’s boss urges her to spend the Christmas holiday in Hawaii, and hands over her Maui condo. Lori is initially hesitates, because this is her first time away from home, but then decides to invite her four best friends to come with her. She has made so much money modeling that she’ll buy them all round-trip plane tickets.

In addition to Kit (semi-engaged to her long distance boyfriend Justin), this includes Alex (a freshman at Northwestern and contender for the Olympic diving team), Elaine (the nerdy one, in her first semester at Stanford), and Stephanie, Alex’s foster sister who had to re-do her Senior year back in California. Stephanie can’t make it, so we can just forget about her.

Each of the Super Seniors has romantic troubles. While we don’t hear about Lori’s older man again, she is also too busy working to have a love life; Kit questions whether she’s ready to be engaged-engaged; Elaine is getting over an “intense” relationship and thinks men only see her a “brain”; and Alex is dealing with TRAGEDY:

She didn’t want any more close relationships in her life. They were too tough to handle when they fell apart. And her experience had taught her that’s exactly what happened. Every time. First there’s been Noodle, and then Danny and then…”

Wait, she has tragically dead boyfriends named Danny and NOODLE???

And then there is

“…a frightening, recurring nightmare, of Wes Thorsen’s horrible death and the agony that had haunted every minute of Alex’s life since she learned of it.”

It is finally clarified that Wes died in a race car accident, right after he quit the sport because it was too dangerous, and also that Noodle was Alex’s brother, not her boyfriend, and he died of cystic fibrosis. We never learn if he has a given name other than Noodle.

This book is pretty chunky for a paperback (250 pages) and until the very last chapter shockingly little happens, mostly serving as a travelogue of Maui circa-1986. I really hope that Eileen Goudge at least got to expense her vacation out of this!

Upon their arrival in Maui, the girls have encounters with various HUNKS. Elaine decides to cut loose and have a “fling” with Joe, a surfing instructor who has more bod than brains; Kit is aggressively faithful to Justin, until she has her head turned by Sean, a hunky boat captain; Alex has sworn off love forever until Danny telegrams her that he’ll be arriving in Maui on Sean’s yacht; and Lori is pursued by neighbor Kevin, who claims to be a close friend of her boss.

Ugh, Kevin. When Lori repeatedly expresses ambivalence towards his overtures, he showers her with expensive gifts, including a bikini skiing (???) trip to The Big Island and this:

Inside the box was a plain oyster, its shell looking rough and incongruous in the tissue that surrounded it…

She took the oyster out of the box and turned it over. She gasped as it opened in her fingers. The oyster was lined with black satin, and on the satin lay a strand of magnificent pearls. Real pearls! They must have cost a fortune.

Danny and Sean arrive on Maui, and Alex feels a spark reigniting with Danny (who HADN’T HEARD ABOUT WES GETTING TRAGICALLY EXPLODED); meanwhile Sean, the wealthy son of the yacht’s owner starts hitting on Kit. I’d provide a quote, but it’s all of the “Hey baby, you don’t NEED a bathing suit” variety.

The two couples take the yacht out around some outlining islands, and Sean is VERY PRESUMPTIVE about Kit’s level of sailing expertise, interrupting her every time she tries to correct him. When Alex and Danny take a skiff to explore an uninhabited bird sanctuary, Kit dozes on the sundeck, only awakening when the weather turns cold and a storm comes up! Cap’n Sean went for his nap below deck, and when she rouses him it is clear that he is not a very good yachtsman, and is mostly terrified about messing up his dad’s big boat. He insists that they have no way of getting ashore at the bird sanctuary and abandons Danny and Alex…

…Who bide a cold Christmas Eve in a native burial cave without any food or water (Sean’s canteen had “fallen overboard” at some point between L.A. and Maui), so they have to ponder the ethical dilemma of whether they should eat the nesting Cormorant’s eggs, but Danny points out:

“This is a bird sanctuary and there’s a law against raiding the nests. If we’re caught, it could mean years in jail.”

Alex says that it would actually be pretty great for the park police to show up and rescue them, jail or no. Luckily, at this very moment, Kit, Lori and Elaine roll up with the Coast Guard. Christmas (and Alex and Danny) is saved!

As promised on the back cover, Kreepy Kevin reveals himself to be the marketing director for Cachet cosmetics, sent by Lori’s boss to lure her into signing the modeling contract. She tells him to shove off, and then has a encounter with an elderly beachcomber who previously had admired her sketching. He turns out to be a super-duper rich and famous photographer, who invites her over for tea with his Japanese man-servant, and says that he will pay her enough for a modeling session that she can attend art school to develop her talent. Question: wasn’t Lori already rich from being a model? She took all her friends to Hawaii!!!!

As they prepare to head for home, Alex and Danny decide to give love another try, while Kit decides she’s just not ready to become engaged to Justin.

Ok, what about Elaine in her fling with Joe? Well, she spends the night at his apartment on Christmas Eve, but confesses to her friends that he was too dumb to sleep with.

…They would never forget the wonderful week they had spent together, their special Hawaiian Christmas.

Merry Christmas and Happy New Year! We shall return in late January with new content!

During the break I will also be (finally) answering comments and e-mails and updating the Name That Book! Page. See ya next year!