The Department of Danger! There was something about the words that sent a faint chill down Chris’s spine. 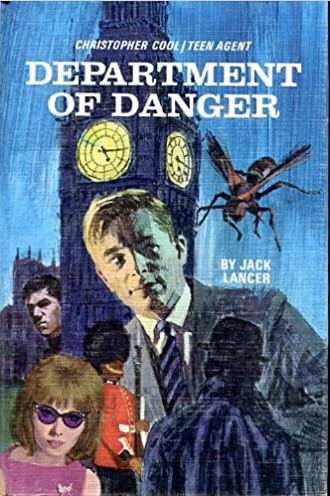 Background: It is somewhat comforting that (for at least a few more volumes) I know I can always fall back on Jack Lancer’s Cold War relic of a boys’ series, featuring the completely baffling spy adventures of Ivy League golden boy Christopher Cool and his stealthy, Indian-y roommate Geronimo Johnson, in the employ of the Top-Secret Educational Espionage Network (TEEN):

This hush-hush corps of bright young students had been specially developed by the CIA on the theory that its members would be less open to suspicion than older agents.

In previous volumes, you may recall that Chris was mostly repeatedly rescued by Geronimo and feisty (duh) redhead (of course) co-ed agent Spice Carter. At least when he wasn’t being totally inconspicuous by donning blackface and wrapping himself up in the living room drapes as a “disguise” and getting chased by bats or hunting Nazis in the Middle East.

Author “Jack Lancer” is a pen name for James Lawrence, who wrote for a number of G & D series, but is probably best known for his work on the James Bond and Friday Foster comic strips (the latter of which was adapted as a movie for Pam Grier). Under his own name he also wrote the trashy, semi-pornographic Dark Angel series… which in the spirit of shameless self-promotion, I can direct you to my essay about that series contained herein!

The Plot: While Christopher Cool adventures have so far been variously disorganized, confused and baffling, this third volume seems particularly phoned-in. Geronimo and Spice aren’t given much to do (they barely even rescue Chris at all!) and (FINALLY) a new TEEN Agent is introduced, only to be whisked away after one paragraph. We’ll get to him.

Without introduction or fanfare, Chris’s snappy roadster blows a tire in the opening pages- but could it be a trap set by a rival hot-rodder? Probably since when Chris gets out to inspect the damage the dude pulls a gun on him. A few karate chops and one “Sleepy Sliver” TEEN-issued tranquilizer later Chris has disarmed his assailant and return to inspecting his tire:

“So that’s how he blew my tire. A jet blast of powdered glass as he went by! Quite a little gimmick.”

Seems unnecessarily complicated, but that is true of most of the things that happen in this series. Chris rifles through his wallet, notes that his driver’s license identifies him as “Paul Shenko” (this will have almost nothing to do with anything that happens subsequently in the book, so why are we spending so much time on this?) as well as a picture of himself, Christopher Cool, TEEN Agent! Chris at least stops to ponder if his cover has been blown, ending both his and Geronimo’s spy-careers.

Back at his dormitory at Kingston College (Princeton wanted to part of this) Geronimo informs him that he’s had a call from Teen Headquarters, and Chris learns that he’s had a call from the Atomic Research Institute who have received a letter in their care regarding his father, a famous scientist that had gone missing behind the Iron Curtain before the series started.

Chris and Gerry drive up to Boston to collect the letter, only to learn that Christopher Cool has already collected the letter and departed. OH GOD THERE ARE TWO OF THEM NOW????

Chris gets his father’s colleague to confirm his identity, and they conclude that the director’s new secretary, Miss Atkin, must be the enemy informant, when called in for questions she escapes by means of a pink smoke-grenade (Miss Atkin, feminist hero?) and then out of nowhere Chris and Gerry are chased by bats, which is leitmotif with this series.

And I don’t know why they bothered with the bats, because soon enough Chris falls off a cliff due to his own bumbling incompetence, which leads to him and Gerry being spotted by more enemy agents and their giant, sonar-controlled wasps. The bugs, not the landed gentry.

Chris and Gerry catch and subdue the wasps and call in for help, which arrives in the form of

Beauregard Tatum, a Negro late of Mississippi and currently a student at Harvard, is one of TEEN’s most remarkable students. He has a six-foot-four frame and 270 pounds of slablike muscle. He also has one of the most brilliant minds ever recruited by TEEN but does his best to disguise his brainpower with flamboyant foolery.

Beau gets out of the helicopter, literally does a soft-shoe dance and greets Gerry with “’Lo there, colored boy!”

He takes the wasps off their hands and disappears from the book.

Back at TEEN headquarters, Chris learns that the Imposter Chris has been captured, and he’s an over-age juvenile delinquent named Vinny, who rival spy agency TOAD has recruited to impersonate him, using both plastic surgery and brainwashing. TEEN has recovered the letter regarding Chris’s father, which is from The Dracov Network… which is yes, yet another secret spy agency.

So TEEN is going to make Chris impersonate Vinny impersonating Chris and send him to London to rendezvous with Dracov and/or TOAD. But don’t worry, TEEN has a cover story:

[Vinny] will come in handy impersonating Chris Cool, who was jailed yesterday during a campus riot. We’re [SIC] already given the story to the press, and pictures will be taken in jail to follow it up while you’re in London.

Chris and Geronimo are sent separately to London to avoid arousing suspicion (CHRISTOPHER COOL, BROUGHT TO YOU BY PAN-AMERICAN AIRLINES) and we get many pages of travelogue and local accents which I had to read aloud in the voice of Cruella DeVil’s sidekicks and/or Dick Van Dyke in Mary Poppins.

The plot continues to get murkier, as Chris escapes multiple attempts on his life (TOAD or Dracov? It’s hard to tell by this point), is framed for murder, wears various disguises and has his identity discovered by ANOTHER spy agency, the super-secret branch of MI6 called… THE DEPARTMENT OF DANGER!

Chris has encounters with the dotty “Duchess of Soho”, an insect enthusiast (who I am just going to tell you now turns out to be Madame Dracov), and Pamela, a comely TOAD agent that he meets at a discotheque accompanied by Spice Carter, doing some double-agent work with a backstory as a Philadelphia debutante.

Chris is eventually captured by TOAD because he is SO DUMB, but drops a bug in their office, where the agents are conveniently explaining what this entire plan has been about: Dr. Wong Hsiu (who hereafter is just referred to as “the Chinese”) has defected from the Reds with his chemical formula for making giant vermin (hence the wasps, and also a bunch of giant rats that appear throughout) “Z-factor, as we call it, its Chinese name is quite unpronounceable”  and TOAD and Dracov and the Soviets all want it, and also Chris who they are hoping to kidnap and use to break Dr. Cool into spill his atomic secrets.

TOAD is threatening to release the formula into London’s water supply unless the government turns over the Crown Jewels. At some point Gerry and Spice are also captured and thrown into a cell with Chris to be eaten by exact three giant mutant rats. Chris is resigned to this fate, but Spice steps in and stuns the rats with her strobe-light earrings. Then Christ realizes that Pamela had a change of heart and slipped him the detonator for the bomb that TOAD had strapped to his chest the previous day (CONVENIENT) and they bust out to find that the Department of Danger has sent in counterforces, which is described in literally one sentence:

The battle that followed was short but lively.

I will say that at least we get a hint that the series is going to have a through-line about Dr. Jonathan Cool’s kidnapping (I expect he and Chris will be reunited in the final volume), and also that I am here for hints at a romance developing between Gerry and Spice, who I like to imagine get together off hours and complain about having to constantly pull Chris’s chestnuts out of the fire. Guys, I feel for you, I truly do.