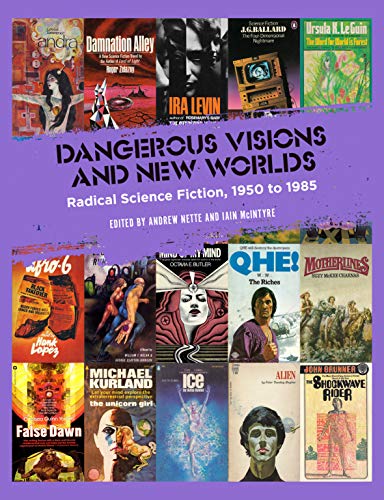 Much has been written about the “long Sixties,” the era of the late 1950s through the early 1970s. It was a period of major social change, most graphically illustrated by the emergence of liberatory and resistance movements focused on inequalities of class, race, gender, sexuality, and beyond, whose challenge represented a major shock to the political and social status quo. With its focus on speculation, alternate worlds and the future, science fiction became an ideal vessel for this upsurge of radical protest.

Dangerous Visions and New Worlds: Radical Science Fiction, 1950 to 1985 details, celebrates, and evaluates how science fiction novels and authors depicted, interacted with, and were inspired by these cultural and political movements in America and Great Britain. It starts with progressive authors who rose to prominence in the conservative 1950s, challenging the so-called Golden Age of science fiction and its linear narratives of technological breakthroughs and space-conquering male heroes. The book then moves through the 1960s, when writers, including those in what has been termed the New Wave, shattered existing writing conventions and incorporated contemporary themes such as modern mass media culture, corporate control, growing state surveillance, the Vietnam War, and rising currents of counterculture, ecological awareness, feminism, sexual liberation, and Black Power. The 1970s, when the genre reflected the end of various dreams of the long Sixties and the faltering of the postwar boom, is also explored along with the first half of the 1980s, which gave rise to new subgenres, such as cyberpunk.

From civil rights and Black Power to the New Left and gay liberation, the 1960s and 1970s saw a host of movements shake the status quo. The impact of feminism, anticolonial struggles, wildcat industrial strikes, and antiwar agitation were all felt globally. With social strictures and political structures challenged at every level, pulp and popular fiction could hardly remain unaffected. Feminist, gay, lesbian, Black and other previously marginalised authors broke into crime, thrillers, erotica, and other paperback genres previously dominated by conservative, straight, white males. For their part, pulp hacks struck back with bizarre takes on the revolutionary times, creating fiction that echoed the Nixonian backlash and the coming conservatism of Thatcherism and Reaganism.

Sticking It to the Man tracks the ways in which the changing politics and culture of the 1950s, ’60s, and ’70s were reflected in pulp and popular fiction in the United States, the UK, and Australia. Featuring more than three hundred full-color covers, the book includes in-depth author interviews, illustrated biographies, articles, and reviews from more than two dozen popular culture critics and scholars. Among the works explored, celebrated, and analysed are books by street-level hustlers turned best-selling black writers Iceberg Slim, Nathan Heard, and Donald Goines; crime heavyweights Chester Himes, Ernest Tidyman and Brian Garfield; Yippies Anita Hoffman and Ed Sanders; best-selling authors such as Alice Walker, Patricia Nell Warren, and Rita Mae Brown; and myriad lesser-known novelists ripe for rediscovery.

“This is the ultimate guide to sixties and the counter culture, of which I was a part. Long hair, bellbottoms, short dresses, and a kiss-my-ass attitude to the powers that be. Real meat on real bone, the stuff of one of the most unique and revolutionary generations ever, baby. You need this.”
—Joe R. Lansdale, author of the Hap and Leonard Series

“This book is a story about stories—the rough-and-tumble mass fiction of the 1950s to the ’80s, written to offend The Establishment and delight the rest of us. In Sticking It to the Man, McIntyre and Nette offer us a fascinating smorgasbord of (un)savory tales—the kind whose covers entice and whose texts compel. These are the novels that provided us with our guiltiest reading pleasures of the mid-to-late Twentieth Century. They are reviewed by the critics who understand them best, and who give us lively insights into the historical and social forces in play as they were being written. The authors represented range from top-of-the-line famous to almost anonymous, and they all have something chewy to say. Plus—you have the added fun of enjoying reproductions of those wicked pulp paperback covers. You had better buy two copies!”
—Ann Bannon, author of The Beebo Brinker Chronicles

“Oh, the man has been stuck! Get ready for a wild ride through the worlds of ground breaking novels of gay life, thug life, and working-class struggles on three continents, while learning about the social significance of many marginalized works of “pulp fiction.” America still isn’t ready to stand and look at itself (to paraphrase one author quoted in these pages), but this book has done its job and sent me back to the originals. Now I have a bunch more books to put on my must-read list. And you will, too.”
—Kenneth Wishnia, editor of Jewish Noir and author of 23 Shades of Black

The first comprehensive account of how the rise of postwar youth culture was depicted in mass-market pulp fiction. As the young created new styles in music, fashion, and culture, pulp fiction shadowed their every move, hyping and exploiting their behavior, dress, and language for mass consumption and cheap thrills.

With their lurid covers and wild, action-packed plots, these books reveal as much about society’s deepest desires and fears as they do about the subcultures themselves. Featuring approximately 400 full-color covers, many of them never before reprinted, along with 70 in-depth author interviews, illustrated biographies, and previously unpublished articles, the book goes behind the scenes to look at the authors and publishers, how they worked, where they drew their inspiration and—often overlooked—the actual words they wrote.

It is a must read for anyone interested in pulp fiction, lost literary history, retro and subcultural style, and the history of postwar youth culture.