Dear Bill, Remember Me? and Other Stories By Norma Fox Mazer

These stories about eight young women who have grit and humor are unforgettable. 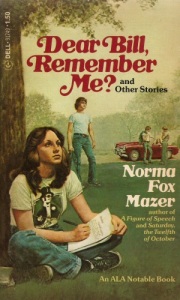 YA short story collections are usually a mixed bag, what with spinster school teachers dropping dead at square dances, Barry Cowsill taking you away from All That, PTA moms agitating for nudism, grade school kids getting involved in germ warfare and allegorical dead chipmunks.

This collection, from YA superstar Norma Fox Mazer, maintains both a higher standard of quality and more serious and sophisticated themes than anthology collections.

Mazer’s (arguably the more famous half of the YA Mazers) output was at its height during the 1970s and 80s, primetime for dealing with sex, drugs, terrible parents and other difficult situations. Even the “romance” stories in this collection are decidedly non-fluffy.

“Up On Fong Mountain” 16 year old Jessie casts a critical eye on her parents’ marriage over the course of the spring semester journal that she keeps for her English class, and wonders if, like her mother in her relationship with her father, is too focused on being “sweet” to her new boyfriend, B.D.

B.D. is pressuring her to “go all the way”, even though Jessie isn’t ready. In response, he accuses her of deliberately starting arguments on the subject and nicknames her “Porky”, which he says is short for porcupine, but is humiliating for a girl already sensitive about her weight.

B.D. is also obsessed with his family’s “heritage” as “pioneers” and carries around a map showing all of the towns, roads, rivers named after his ancestors. When Jessie finally gets fed up hearing about how great his family is she points out that they had basically stolen land from the local Indian tribes and renamed everything after themselves, which does not sit well with B.D. (the title refers to the metaphor Jessie uses to try to get him to shut up about it: how would he feel if the Chinese decided to “discover” their town and rename everything?)

They eventually break up and Jessie gets a job at the local donut shop and one night B.D. shows up wearing a fedora and talking like a 1930s movie gangster to try to win her back. The ending remains ambiguous as to if this will work.

“Peter In The Park” Poverty and single-parent families are a recurring theme in this collection, and in this one 13 year old Zoe struggles along with her mother, grandmother and aunt on the wrong side of Syracuse, NY, having been collectively abandoned by the men in their lives.

The togetherness of her family is stifling, and so Zoe keeps it a secret when she takes a forbidden shortcut through the city park one day and meets 19 year old Peter, who has decided to drop out of society, man, and see the country in his old station wagon.

They strike up a seemingly-innocuous friendship, and when Peter finds out that her birthday is coming up, invites her to join him for a breakfast featuring foraged hippie foods. But her family has other plans, including the least-appetizing description of blueberry pancakes on record:

Zoe stares at the mound of pancakes with their little blue bubbles, like blue pimples.

They conspire to keep Zoe occupied for the entire day, until finally she can’t stand it and runs out of the house at 2 am and to the park to find Pete, who, of course, has pulled up stakes and moved on.

“Something Expensive” Marylee’s parents are having dueling mid-life crises, so she takes a Pennysaver route to earn some money, but mostly get out of the house and away from their constant bickering. Her newfound independence makes her consider if she has been too much of a pushover her entire life (another mooching boyfriend, this one presuming her can always copy her homework). After she catches her mother in the midst of an extramarital affair, she gains the strength to confront the classmate who stole her gold wristwatch out of her locker. METAPHOR!

“Mimi The Fish”  Mousy Mimi is stuck with a Popularity Queen mother and family that has fallen on hard times (her father is a butcher in the midst of the 70s Meat Crisis). She scores a date to the YMCA dance with Popular Robert, despite the fact that the invitation sets her Carrie White-senses tingling. She tries to keep the date a secret from her mother, who still manages to barge right into it, on the pretext that she needs Mimi to deliver an order of limburger cheese to one of their regular customers.

Popular Robert is a good sport about making the detour, but Mimi discovers that the customer has apparently moved and her mother has failed to give her the new address. Stuck with a pound of stinky cheese in her pocket for the duration, Robert proves especially understanding, pretending to not notice the smell of “rotting corpses” that all of his classmates comment upon.

After arriving home, Mimi’s mother is strangely unconcerned that the CHEESE EMERGENCY was never resolved, and Mimi suspects that her mother deliberately ruined her date.

Burn the house down, Mimi. No jury in the world would convict you.

“Dear Bill, Remember Me?” 15 year old Kathy writes a score of drafts of letter to her older sister’s ex-boyfriend, whom she had had a crush on in grade school, trying out tones from elaborately casual (“Bill, old chum!”) to sophisticated to confessional.

Eventually it is revealed that after her sister broke up with him, he had promised to keep in touch with Kathy… and then that it was SO MUCH MORE DRAMATIC.

Eventually Kathy lets it slip that she’s writing because she saw Bill’s engagement announcement in the local paper: he’s marrying a much older, wealthier woman and Kathy wonders if it is because her sister always made him feel bad about being from a poor family. After pouring out her feelings, Kathy eventually decides on a simple note of congratulations.

“Chocolate Pudding” Guys, I don’t even know with this one.

Teenage Chrissy lives with her alcoholic father and uncle in a decrepit trailer in rural western New York, but it seems like Mazer is hinting that the town has ostracized them for reasons beyond being winos, so maybe they’re a gay couple? Every few months they disappear on a bender, and Chrissy gets to clean up the vomit and broken bones they inevitably return with.

During one of their disappearances Chrissy starts sort-of dating  bourgeoisie Teddy Finkel, even unashamedly bring him home afterschool. Teddy is enraptured by Chrissy’s authentic lifestyle, praising it as “so essential” and complaining about his family’s house in the suburbs:

“More rooms than we need. And furniture, and all kinds of garbage. Conspicuous, wasteful, disgusting consumption. Let’s not talk about my house or my family.”

SIGH, everyone hates a tourist, Teddy!

“Guess Whose Friendly Hands” Louise, another desperately poor teenager in western New York whose father has checked out with his mistress long ago, knows that she’s dying of non-specific cancer, even if her mother and sister refuse to acknowledge that fact.

Rotting away in a back bedroom, Louise is hardly going in the angelic, Lurlene McDaniel-approved fashion, and is instead bitter and depressed about the whole thing:

This business of being sick, of slowly dying had gone on too long! It was rude, disgusting, and expensive.

She passes the days contemplating the phantom pain from an amputated leg, the classmates that have long stopped visiting, the boyfriend who had gone to college in California and stopped writing, and the fact that she doesn’t believe in God.

After a visit from her old boss (who had sort of been creeping on her when she was a nubile teenager), Louise finally forces her mother and sister to admit that she’s not going to live to see nineteen and they should stop making plans for all the stuff she’ll do when she’s “better”, leaving Louise content and looking forward to death “like a gift.”

“Zelzah: A Tale From Long Ago” There is always an oddball in the bunch, and this is the one in this collection: a semi-allegorical story about fifteen year old Zelzah (“Shade-in-the-Heat”), leaving the shetl in Poland for arranged marriage with her first cousin, Jacob, in Vermont.

Things Do Not Work Out As Planned. Zelzah is eager to adopt American ways, and although Jacob is constantly sneaking into her room at night, he abruptly steals his older brother’s American girlfriend and impregnates her. Oops.

Zelzah’s aunt and uncle are embarrassed at this turn of events, and assure Zelzah that she will always have a home with them, but Jacob and his new wife will be living with them, so awkward. Uninterested in returning to Poland, Zelzah instead goes to New York City and works in a sweatshop, pays for her younger sister’s passage to America, attends night school for her high school diploma and then spends a  harrowing eleven years earning her bachelor’s degree and teaching license. Moving to upstate New York, she becomes a popular third grade teacher, even as her sister reminds her that in America, a woman in her 40s can still get married! Zelzah chooses spinsterhood and her cats. You go, gurrrrl.

8 Responses to Dear Bill, Remember Me? and Other Stories By Norma Fox Mazer