Judy is every teen-age girl. She personifies the realities and the fantasies of the in-between years, the joys and heartaches of growing up. 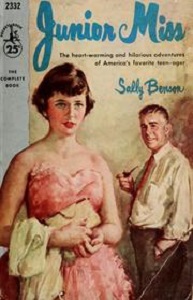 Background: I was unaware of the pedigree of this book when I went looking for something older (chronologically speaking) on the YA spectrum. I quickly was delighted to learn that Sally Benson is probably best known for providing the source material for Meet Me In St. Louis, and that the character featured in this book, Judy Graves, originated in a series of short stories in The New Yorker in the 1930s and 40s. The book was turned into a  successful Broadway play in 1941, which was adapted into a movie four years later,  and two radio series (the first starring Shirley Temple as Judy).

The Plot: Originally published in 1941, this book collects twelve of Benson’s stories and arranges them roughly chronologically to make up a year in the life of 12 year old Judy Graves and her family, involving their very mild adventures on the Upper East side of New York and their summer home in South Dorset, Vermont.

The book opens in the spring, with Judy’s mother considering the possibility of buying her younger daughter a stylish new winter coat now that they are on sale. Judy has her eye on a specific one advertised in the Sunday paper, with a real squirrel fur collar that promises “the new Continental look”.

Her fifteen year old sister, Lois, rains on the parade, however:

“Get the coat, by all means, if you don’t mind looking like a sack of meal. Or worse.”

“What do you mean worse?” Judy asked grimly.

“You know,” Lois said meaningly. “What I told you.”

Judy’s face was white and her lips trembled. “I won’t”

“Oh yes you will. With that big bow.”

“Will what?” Mrs. Graves asked. “What are you two talking about?”

“She’s mean,” Judy said. “She wants to spoil everything, and I won’t let her.”

“Will what?” Mrs. Graves repeated.

“Look pregnant.” Judy blurted it out.

This sets the tone for the entire book: Judy and Lois’s bickering and snobby Lois’s attempts at sophistication are enough to drive any reasonable parents to drink (which only results in additional comic mayhem).

Judy secretly thinks that Lois is just jealous,  that if Judy gets the coat she herself will no longer have the nicest coat in the family, so when they get to the department store and find that big-boned Judy won’t even fit into the largest size in the children’s department and suggests they go to the Junior Miss department, Lois panics. Will her younger sister end up with a newer and nicer AND more grown-up coat?

Thinking quickly, Lois stuffs Judy into the too-small coat, scolds her mother for not considering alterations and declares it “perfectly charming”. But she can’t help herself from adding:

“Of course, no matter what you put on Judy, she looks as though she were going to you know what.”

A number of Judy’s adventures involve her best friend and neighbor, Fuffy Adams, including the construction of an elaborate “Mouse Sanctuary” for a orphaned mouse they find in Vermont, which promptly dies, leading them to plan for an even more elaborate funeral (shades of Agnes and Tootie in Meet Me in St. Louis).

Judy is overcome by Shirley Temple’s performance in The Little Princess, despite Fuffy declaring it “so absolutely saccharine.”

Taking her cue from the movie, Judy decides that she has failed to show her father the proper appreciation and decides to make it up to him:

When she saw her father, she sprang toward him with such enthusiasm that she almost threw him. “How nice you look!” she cried.

“Judy!” Mrs. Graves said sternly. “How many times have I told you not to make fun of your father. It’s time you girls showed him a little respect.”

Mr. Graves is further confused by his daughter’s sudden interest in his war record:

“If this country goes into the war, would you have to go?”

“Oh, I hope so, too. On the other hand, you couldn’t very well not go, could you? I mean if your regiment went.”

“What are you talking about?” He asked crossly. “I don’t belong to any regiment.”

Judy, remembering the gallant way the English father had answered the call to colors, found it very hard to answer. “You know best, Daddy dear.”

Judy’s loyalty to Fuffy only slips when she meets the glamorous, bohemian Bates family, who are constantly doing exciting things like hooking rugs and sleeping in bunk beds. Mrs. Graves quickly tires of hearing about the Bateses, especially when Judy suddenly takes a proto-hippie interest in health food:

“Do we have balanced meals? She asked. “Mrs. Bates balances her meals so that everyone gets everything, like iron and roughage.

“Mrs. Bates says that your big meal should be in the middle of the day. And at night they have cocoa and toast and fruit. I think that’s a very sound idea, don’t you?”

The Graves parents are as vividly painted as the teen- and pre-teen characters in the book: when Judy has to write an “autobiography” as a school assignment, her focus on a few months in the fall of 1933 when her father lost his job and Judy was forced to attend (HORRORS!) public school threatens to send him into a such a depression that her mother hastily invents a distant relative who was a pirate and urges Judy to write about the family’s rich history of piracy instead.

After a holiday season in which both parents have tippled their fair share, in a burst of (drunken) magnanimity, they declare that they are raising the girls’ allowance to $5.00 a week so they may practice saving their money. Unfortunately he hadn’t thought the plan through, so finding himself short on New Year’s Day with the banks closed, he has to prevail upon the family maid to borrow the emergency dollar that she keeps pinned in her brassiere.

Lois calculates that this will enable her to save enough to take a trip to Bermuda by her 18th birthday:

“I’ll be eighteen, and there is absolutely no reason why you can’t go to Bermuda alone when you’re eighteen!”

Judy, desperate to prove that she is practical, immediately goes to the dime store in order to buy a ledger and bank to better enable her saving. Before she knows it she’s gone through the entire $5.00, including the part that was supposed to be spent on her lunches the whole next week.

My favorite vignette is told entirely from the parents’ point of view, as they attend Judy’s performance in her school’s production of The Tempest (school plays will always be fertile ground for this kind of thing). They are surprised and somewhat concerned to note Judy’s billing as “Stephano, a drunken Butler”:

“I suppose they know what’s they’re doing. Giving a part like that to a little girl, I mean.”

She glanced at the program thoughtfully. “I think it would have been nice if they had decided to give ‘The Mikado’.”

The Graveses make it through the first act, noting that all of the other children’s performances seem to be lacking (“The girls do mutter, don’t they?”), when Judy finally appears in the second act, “the first completely audible voice in the performance”.

Judy is a big hit (she gets a curtain call after every scene) but it slowly dawns on her parents that she’s basing her performance on her own father.

The final chapter involves Judy and Fuffy’s careful wheeling and dealing to get Judy a date with Haskell Cummings, a friend of Fuffy’s older brother to a formal dance being held by a classmate (Fuffy is being escorted by her brother, who has the awesomely WASP-y name of Barlow Adams). After assuring Haskell and Barlow that they think dancing “a bunch of phooey” she assures them that “we can stir up something” like dropping paper bags full of water out of the window onto helpless pedestrians. But when Barlow appears to escort Judy to the dance she is wearing a white tulle dancing dress and makeup, declaring that she loves dancing!

After they’re out the door, Mr. Graves is left howling with laughter about how Judy managed to really put one over on poor Barlow!

Blog Update: Be sure to check the Name That Book! page for recently-added vaguely-remembered books that are looking for a title!