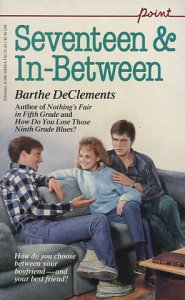 I got a number of requests for the final book in DeClements’s series featuring Elsie Edwards, as she evolves from gross 5th grade pariah to a beautiful but emotionally scarred high school student while dealing with a neglectful mother, bratty younger sister, absentee father, and newfound popularity with her male classmates picks up halfway through Elsie’s junior year of high school.

While the middle-reader Nothing’s Fair in Fifth Grade pretty much solved all of Elsie’s problems by putting her on a starvation diet (and successfully escaping from a kidnapping attempt….), DeClements added more nuance when telling the story from Elsie’s point of view in its YA sequel How Do You Lose Those Ninth Grade Blues? And like its predecessor, this one benefits greatly from Elsie’s point of view, as an imperfect heroine with no easy answers.

The Plot: While Elsie had successfully overcome some of her insecurities and established a relationship with hunky senior football player Craddoc Shaw, the astute reader might have already been thinking that Craddoc wasn’t all he was cracked up to be.

Now about to turn seventeen, Elsie is still a math genius and talented soprano vocalist, and Jenny Sawyer is still her BFF. She has a better relationship with her younger sister, Robyn, who finally seems like she’s growing out of her bratty phase. But her relationship with her terrible mother is still tense (at one point Elsie admits that they’ve “mostly been ignoring each other for the last couple of years”), and her father and step mother are still constantly trying to rope her into babysitting for their now-toddler. Her ostensibly-platonic friend Jack (last seen smoking pot behind the auto shop in Ninth Grade) has dropped out of school and moved to across the state to work in the lumber industry.

And then there is Craddoc, who now has to be like 20 and a football star at Washington State. He and Elsie are still together, but things are complicated by both her close friendship with Jack and Craddoc’s pressuring her to sleep with him.

And then there’s Elsie’s mother. Jenny can’t believe it when Elsie spends most of her babysitting money on a purse for her mother’s Christmas present:

“Gawd, you’re extravagant,” she said as we scurried out to my car in the rain.

“I know, but I hardly ever find anything I’m sure she will like.”

“She’s always been such a bitch to you, I don’t know how you can’t even spend five dollars on her.”

I was the target of her frustrations until I was fifteen. That was after the diets had finally worked and I had Jenny and Jack for friends and Craddoc for love. Even though the damage no longer showed on the outside, the years with Mother set my head up to expect rejection.

DeClements packs A LOT of drama and moral dilemmas into the 18 chapters, but still balances it with a comic tone (in a throwaway line we learn that busybody Sharon has joined a cult, which I found hysterical). There is a major subplot involving a couple of Elsie’s delinquent classmates trying to break into the school’s new computer system to change their grades. Jenny’s parents finally call it quits (CALLED IT), with her father and younger brother moving to San Francisco. Elsie’s mother has a breast cancer scare. Elsie tutors a Special Ed student that her male classmates (….including Craddoc…) regard as an “easy lay”. Her father’s marriage is on the rocks, and she has to threaten her stepmother with a call to Child Protective Services when she takes out her problems on her baby brother.  And every time Craddoc comes home from college for a visit he’s on Elsie’s back about going to Planned Parenthood and getting on The Pill.

As always, Elsie turns to Jenny’s mother for advice:

“I don’t know. It’s just that I always thought I’d be burning all up with desire and could hardly wait. I’m stupid I guess. Or maybe I’m frigid. I like his kisses and all, but.”

When over Christmas vacation Craddoc makes a whole THING about it and drives Elsie to Planned Parenthood himself (although he finds out that it takes a month for The Pill to be effective, dude), the reader is already starting to figure out that although Elsie is less than enthusiastic about Craddoc in that way she is starting to feel that way about Jack, whom she carries on a lengthy correspondence with throughout the book, but doesn’t actually show up until near the end. While the scene depicted on the cover never actually happens, he makes a surprise trip home for Christmas and all of that fresh air and exercise has turned him into a major hunk:

There he stood, a foot taller than me and with shoulders about three feet wide.

“Jack! I can’t believe it. You look so different! Come on in. Let me take your jacket. Ohh, Jack!” I dropped the jacket he’d handed me on the floor and threw my arms around him. Pulling back, I searched his face trying to figure out why he looked older. “It’s that mustache!”

After the new year, Craddoc plans another trip home, specifically for the reason of doin’ it, but those plans are foiled  when Elsie has a sudden psychic urge that Jack has been injured, and calls around the lumber camps to no avail, until she finally gives in and calls his estranged mother to find out, sure enough, there was a freak accident and Jack has been airlifted to the hospital.

A few weeks later Elsie makes the trip to see him, forcing both to admit that feelings are being felt:

“Then you have to make some decisions- “

A major point in the book is that Elsie is finally realizing that her good looks, talent, and intelligence (as well as latent guilt on her mother’s part) allow her to exercise a sort of power over people, and the temptation to use that power for only her own ends. While some readers have complained that Elsie comes off as judgmental in this book, I think DeClements does a good job of rounding out all of the characters- even when the amateur computer hackers get caught and arrested, they are still given enough backstory that you understand what drove them to it.

Okay, except maybe Craddoc. I mean, I’m sure it’s hard dating a high school girl when you’re in college, but he’s kind of a sleaze in this one. Elsie breaks up with him via U.S. Mail and decides to take a summer job near where Jack is working to see if they have a future together. SENSIBLE!

Callback Department:
Elsie is now driving the 2-seat sports car her mother wouldn’t let her ride in in Fifth Grade, although it is noted she sold it to her for the full Blue Book value.

I caught reflections of myself in the wide mirror. The sweater seemed to make my eyes look bluer.

echos Elsie’s (rejected) overture towards her mother in Fifth Grade.